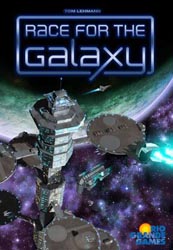 Having missed out on Friday’s regular session, Chris and I sat down on Sunday afternoon to play Race for the Galaxy. The game takes a bit of explaining but Chris picked up the basic strategies pretty well. However, with this being his first try at the game, he was further down the learning curve as far as determining how the card combinations work well together. We played the advanced two player version with each player picking two actions per turn, as I thought this would get the game moving a lot quicker.

Chris went down the military route and built up his military capability reasonably quickly but he did not have any cards with consume powers which definitely hurt him. This was especially true as I was drawing cards that helped with the consume / produce route of play. Chris built the Alien Tech Institute and with an alien production world and two windfall worlds got a nice 9 point bonus at the end of the game. I had the Mining League and had managed to draw and build both Mining Robots and Mining Conglomerate so also got an endgame 9 point bonus. However, I had managed to Consume x2VP twice for 10 VPs each time, which made all the difference and I ran out a comfortable winner 45 – 28.

Even though he was finding his feet, Chris did enjoy it and I’m sure we’ll be playing again. I’m just now starting to see some of the real strategy options from certain card combinations and this is raising my opinion of the game as the big variety of cards means there are lots of variables to explore each time you play. In a month where the new games played have not quite hit the mark for me, Race for the Galaxy looks like being my Game of the Month for March.