My latest batch of Ebay games has less than three days to run and there are lots of good games up for grabs. One of the highlights is an unplayed copy Mystery of the Abbey complete with Pilgrims Chronicle expansion. Another has to be Wolfgang Kramer’s classic Tikal and Tikal II, while Reiner Knizia is not to be outdone as the original Kosmos edition of Durch die Wuste (Through the Desert) and the clever astract Fish Eat Fish can also be yours for a very modest bid.

Lovers of cool bits will find much to admire in Utopia and Giganten, while those with more refined tastes can sample tea in Darjeeling, coffee in Guatemala CafeÂ or the opera in … err… Opera. Those explorers among you will get a kick out of Klaus Teuber’s brilliant Entdecker (the original Goldsieber version) or developing Leo Colovini’s Islas Canarias. Those looking for three player games can’t go far wrong than look at one of the best three player conflict games, Das Ende des Triumvirats, while two player abstract fans can build bridges in Ponte del Diavolo.

Semi-cooperative game fans really ought to look at Mousquetaires du Roy (All for one and one for all – except one who’s trying to thwart them) while ancient history buffs should be satisfied by Magna Grecia, Municipium (Reiner again) and Klaus Jurgen Wrede’s excellent Mesopotamia.

Basically, there’s something for everyone. Advert over. Go look at my Ebay page here.

As I ususally do on Superbowl Sunday, I had a go at predicting the result by playing a boardgame version. The last few years I’ve used Pizza Box Football but this year, 1st & Goal is the new kid on the block so it seemed appropriate to see how this played out. I used the base game so there were no team idiosyncracies to take account of.

Bottom line – In a game dominated by the Giants, a couple of key fumbles by the New England offence meant they were playing catch-up in the second half but couldn’t break down the New York defence enough to make it close. The Giants win the Superbowl. 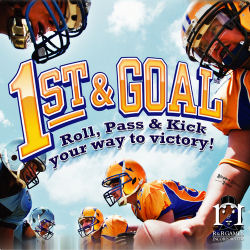 Q1: The Patriots started the game on their 25 yard line but after one first down had to punt it away. The Giants were initially successful with a 24 yard run play but eventually stalled and had to settle for a field goal. New England’s next drive lasted just four plays but they soon got the ball back after intercepting Manning around midfield. Although they again had to punt, the Patriots gathered up a fumble on the return, giving them great field position on the Giants’ 23. On the last play of the quarter, a six yard rush brought New England into the endzone for the lead 7-3.

Q2: The euphoria of scoring had obviously got to the defence as New England gave up 30 on the kick off return, followed byÂ 45 yard and 32 yard completions to restore New York’s lead 7-10. On the second play of the Patriots’ next drive, they coughed up the ball giving the Giants great field position just 23 yards from the New England endzone. Two superb run plays took the ball in to give the Giants a 10 point lead but things were about to get worse as the Patriots fumbled the kick off return, leaving the Giants in even better position on their opponents’ 21 yard line. The Patriot defence eventually brought themselves back to life to stall the Giant offence but still had to suffer a field goal 7-20. New England had time to get a field goal and prevent their opponents from scoring again to leave the score 10-20 at half time.

Q3: The Giants returned to the field feeling pretty happy and were content to keep things tight and wind down the clock. However, the Patriots defence still couldn’t stop the mon the key plays and Manning capped an 80 yard drive with a 10 yard touchdown pass midway through the quarter 10-27. New England made some progress on their reply but still were forced to punt as the quarter drew to a close, not helped by giving away a crucial offensive penalty. The Giants ended the quarter on their own 42 yard line.

Q4: By this time Manning was mixing up the plays and New England didn’t seem to be anywhere near the same wavelength. Another touchdown left the Patriots 24 points adrift with too little time left. At least, Brady started to make some headway but the giants were happy to give away short yardage and eat up the clock. A New England touchdown with a couple of minutes to go brought up the inevitable onside kick but the Giants succeeded in recovering it. Another first down gave them a further field goal attempt but it fell short leaving the final score 17-34. The New York Giants are Superbowl champions.

Yesterday saw my 4th play of Friedemann Friese’s brilliant solo deckbuilder, Friday, and my first win. Woohoo! Going into the pirates, I only had one life point left so wasn’t very confident but I had a number of cards giving me extra life points. These gave me the flexibility to draw extra cards and I managed to get Robinson to escape the island with 2 life points left.