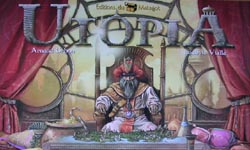 This week we travelled to Utopia to help the Utopian king develop its four islands by inviting princes from the five great civilizations to visit and build monuments and wonders around the many districts of the kingdom. The game was designed by Ludovic Vialla and Arnaud Urbon and published by Matagot / Rio Grande.

Utopia is played in rounds until one player has accumulated at least 50 prestige points to trigger the endgame.Â  Each round proceeds the same way.Â  First, Guest tokens are drawn randomly until you have 3 times the number of players.Â  Each Guest token has a picture of a citizen of one of the 5 civilizations as well as a symbol corresponding to one of the 4 islands on the board.Â  In the first phase of a round, the arrival of the Princes, the players will, one at a time, remove one of the Guest tokens from the board and place one of their matching Prince tokens on any of the districts of the appropriate island.Â  If a player is able to group 3 of their prince tokens of the same civilization together in the same district, the tokens may be removed from the board and replaced with a monument of the appropriate kind. Also on their turn, if a player has a Prince from each of 5 civilizations on the same island, one of the 4 wonders can be built on the island.Â  The builder of the wonder immediately receives 6 prestige points and, whenever any other player builds a monument on that island, he receives between 1 and 4 additional prestige points.

In the second phase of a round, development of the city, all players are randomly dealt 5 Action Cards, which are simply cards depicting each of the 5 different civilizations.Â  Then in turn order, the players carry out as many actions using their Action Cards as they so choose.Â  A player may refrain from using all their cards, but may only carry over a maxium of 5 cards.Â  The actions involve adding, removing or moving princes, or altering the popularity of a civilization. The last of these can be important because after all players have taken their turns playing action cards, calculation of prestige occurs.Â  In scoring, the players receive prestige points for each monument they possess based on the civilization’s popularity so each monument can be worth between 1 and 5 points. If a player reaches 50 or more points in this phase, the game ends at the end of the round and the player with the most points wins.

In our game, Steve started off trying to control the Island of Water and for the most part succeeded in persuading others to concentrate elsewhere, at least for a while. Most people tried to establish one or two quick monuments, although the early builders, Mark K and I, found that the monuments of these civilizations magically weren’t terribly popular. Guy was the first to build a wonder and did so on an island where lots of monuments had still to be built. However, he was also able to build some monuments soon after and his position looked very strong. Mark G soon managed to get 1 monument in each of the five civilizations so then was guaranteed to rake in 15 points per round. My challenge faded when I misread one of the monuments on Steve’s Island of Water and so the wonder I was seeking to build there ended up a man short and Steve built the wonder ahead of me on the next turn. It did mean I was able to build a couple more monuments in the final round and scored a massive 24 points in that scoring but I still came up short with Guy maintaining a fairly comfortable lead.

Utopia seemed to be nearly a very good game. It took longer to play than we had expected and it was a bit dry and brain burning. However, it played solidly and the production is top-notch, although distinguishing between different monuments and civilizations should have been made easier.. All of us thought it was a borderline 6/7 but most of us came down on the 6 side. I wonder how playing with fewer players might alter things.