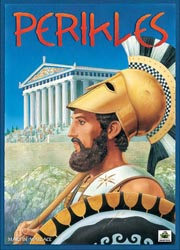 Perikles, published by Warfrog, is a Martin Wallace game I somehow missed out on acquiring when it came out in 2006. I rectified this when the local TK Maxx was selling copies off cheap and we finally got to play it this week. Set in the Peloponnesian War, each player represents a powerful Greek family with political influence spread across the six major city states of ancient Greece. Players strive to become leaders of these cities, thus taking control of their military forces. With these forces players will aim to win glory on the battlefield.

The game is played over three rounds. Players start by taking influence tiles that allow cubes to be placed in a particular city. Once each player has taken four tiles, an election to become leader takes place in each city. Players take turns proposing a candidate in a particular city and each city can have two candidates. Once all the candidates have been determined, whichever of the two candidates has more influence cubes in the city is elected leader and is given control of its military forces. Seven battles are then fought. Players take turns committing military forces to particular battles and, if a player does not control any city, they get to represent the Spartan forces. The relative strengths of the opposing forces is determined and two rounds of battle are fought using dice, with the stronger force having a greater probability of rolling successfully. The winner of the battle is rewarded with the location tile which gives a number of VPs at the end of the game. Once all the battles have been resolved, the city leaders have statues erected to them (for more end of game VPs). Then if either Athens or Sparta have lost four battles, the game ends immediately or you proceed to the next round. After three rounds, the game ends anyway and players total their VPs from statues, battle location tiles and influence cubes remaining in the cities and most VPs wins.

In our game, the first round saw four Sparta battles turned up giving the possibility that the game might end after the first round. Sparta survived just barely, losing three out of the four, and everyone other than me breathed a sigh of relief. I had managed to gain control of two cities and rode the odds well in winning three battles so, had the game ended at that point, I would have been well ahead. However, this then made me a target in rounds two and three. I also had lost lots of influence cubes in Corinth due to a heated election campaign between me and Nige. Nige concentrated on winning elections and protecting the cities whose statues were worth most points and he looked pretty strong by the end of the game. Mark K was intent on remaining leader of Thebes for all three rounds and towards the end chose a few useful battles to commit forces to for good points. Mark G didnâ€™t control a city in the final round so decided to commit his Spartans to a single battle (worth 6 VPs), the one battle I had already committed to in starting the battle phase. I still had loads of military forces stacked up and the odds were comfortably in my favour before we started the die rolls. However, this was Mark G we were up against so the die rolls of course went his way. Although I did manage to scrape through a minor 3 VP skirmish elsewhere, I thought that I had managed to let the victory slip from my grasp. However, I had made sure that I was getting good points from my influence cubes and this was enough to allow me to scrape a hard fought victory. Even I hadnâ€™t managed to lose it from my outstanding first round position.

I really enjoyed Perikles even though there was a fair degree of luck involved in resolving the battles. However, I didnâ€™t feel the luck dominated and it was good that even an overwhelming force could still be outdone so nothing was completely certain. Others felt that the possibility of ending the game early spoilt it. It certainly would mean that some of the strategy would go missing but my view is that it adds another layer to think about as a perceived leader is likely to go for a quick win and the others need to deal with the short term threat to make sure that doesnâ€™t happen. At around 3 hours, the game is possibly at the limit of acceptability timewise but I think this is one of Martinâ€™s most approachable games with the rules and theme gelling well together to present a good challenge.