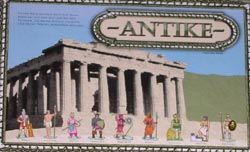 This week, with six of us, we decided to have another play of Antike, a game that we all seem to like. Going into the game, there was one thing of which we were all certain: Mark G would be concentrating on constructing massive armies and stomping on his neighbours. Unfortunately for Mark K, this meant him and pretty much drove him down a defensive strategy.

Steve and Guy started off by pursuing temples, whereas Nige and I sent our armies into new territories to settle new cities. I also started to develop my fleet as no-one else seemed interested and quickly took a point from being in seven sea territories. I also nabbed the sailing ability, while others concentrated on some of the other technologies. At the end it looked close between Steve, Nige and myself and I thought I had just enough points to sack two of Nige’s temples. However, I was just 1 point short and so needed to wait one more turn, which never came. We played using the second edition rules, which gives a VP to players who finish all eight advancements and this was all Steve needed to squeak the win. Well played, although I think he, Guy and I all benefitted from having edge starting positions well away from Mark G!

Antike remains a very good game and one which we all enjoy. You never know, one day we may see Mark G try to win without using his stomping strategy.