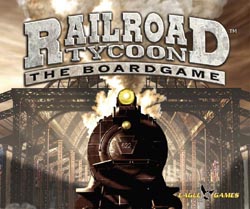 Railroad Tycoon
Phil had at last decided to take the plunge and buy Railroad Tycoon. Although there were only four of us tonight and RT would be good to save for when we have six, the lure was too great and we had to give it a try.

RT is a re-development of Age Of Steam by Martin Wallace and Glenn Drover and published by Eagle Games. The box is packed with gorgeous looking bits and a huge board that struggled to fit on the table. RT is somewhat easier to get into than AOS and more forgiving financially. Not issuing enough shares at the beginning of a turn and being unable to pay costs at the end were potentially crippling in AoS. In RT, you can issue shares any time and this means you can concentrate more on the main body of the game, developing your network and delivering goods. RT does add a couple of elements that also change your focus a bit. You have an individual Tycoon card, that gives you a goal for the entire game (such as have the most cash or fewest issued shares) and rewards you with extra VPs at game-end if you achieve the goal. The other element is a set of operation cards that reward people who achieve certain in-game goals (e.g. to link New York and Chicago) or give a benefit to someone who take the card. Some of these cards are very powerful and give rise to a fair bit of competition. Goods delivery is also dealt with differently with cubes being distributed to all the cities at the start of the game and once all the cubes in a city have been moved out, a marker is placed in that city and once 14 cities have markers in them, the game ends. I like this much better than the AoS re-stocking action, which was always pretty weak anyway.

In our game, Mark G and I started out around Chicago and the Mid-West, while Phil and Mark K concentrated on the East Coast. The East Coast looks good for building up income quickly as there are lots of short routes and Phil took advantage by upgrading to a level 3 train quickly. Mark K was very frugal with his share issue (he had the fewest shares goal, not that we knew that at the time) but took a few of the hotel operation cards, which brought him some benefit when the relevant city was utilised by someone. Phil was, however, speeding ahead and threatened to take one of the powerful city link cards which would have just about sealed the victory. I knew he had to be stopped but expected that I would lose out to the others, if I wasted a turn or three trying to block Phil. Mark K and I spent some while discussing this and perhaps distracted Phil from how I was going to complete the route instead. So, once I had performed the block, Phil didnâ€™t recognise that I could grab the city link on my next action and tried to set himself up for the following turn. Ouch! That allowed me to take 16 points from linking both New York / Chicago and Baltimore / Chicago. They also failed to block me on a 20 point link from Kansas City to somewhere else on the East Coast and that really sealed the victory for me.

I thought Railroad Tycoon was overall an improvement on AoS. Some of the cards were possibly a bit too powerful but the gameplay flowed much more smoothly in my opinion. It took a bit too long but that was partly due to Mark Kâ€™s and my extended discussion on how to stop Phil. Iâ€™d like to try it again with 6 players now that we know properly how to play. A good nightâ€™s entertainment, not that Nige would agree with me claiming another win in his absence.