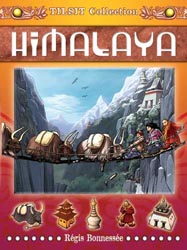 Himalaya
Four of us this week so I decided it was time to try this former Spiel-des-Jahres nominee, designed by Regis Bonnessee and published by Tilsit. A good description of the game is available on BGG, as follows:

“Each player is the chief of a Himalayan high plateau tribe trying to extend his tribe’s influence in the religious, political and economic spheres. The goal is to become the most proserous caravaneer in all of the Himalaya. The board shows 20 settlements consisting of 6 houses, 8 temples and 6 monasteries; furthermore the settlements are connected by either dirt tracks, ice track or stone tracks; the map is also divided into eight regions (the spaces between the tracks linking the settlements). The players collect goods (salt, barley, tea, jade and gold), make offers to monasteries, send out delegations to different regions or bargain to increase their livestock. The game is played in 12 turns representing the months in a year, resulting in a length between 60 and 90 minutes.

During setup, 25 goods are deployed in blocks of 5 over 5 randomly chosen settlements. Of the remaining settlements, five get an order, again randomly determined. The players then deploy their caravan marker. During play, each secretly plots his caravan’s moves of up to six steps. Roads between cities are either dirt tracks, ice tracks or stone tracks. The action markers are likewise marked and have an additional hands symbol which allows you to program a transaction in a settlement. On the back is a sleeping yak which represents a pause in the action sequense. This programming phase is limited to one minute.

A transaction consists of taking the city’s resource marker of least worth (and one cannot stay put and drain a city through repetition) or fulfilling an order by delivering the required goods. When an order is fulfilled, the player can take 2 of the following 3 actions: a) increase his yak heard (economic influence), b) build a stupa (which garners religious influence) and/or c) place delegations in the surrounding regions (political influence). After contracts and resources are removed from the board, they are replenished. Every 4 turns a scoring round occurs where the players who have more of a specific good than any other chief are rewarded. At the end of the game the winner (in a four-player game) is determined as follows: First, the player with the least religious influence is eliminated. Second, repeat with political influence. Third, repeat with economic influence. If need be, break any remaining ties by scoring the remaining stocks of resources.”

It is this excellent victory determination process that sets the game apart. It is extremely clever and ensures players have to do enough in the religious and political areas to keep them in with a chance. The second-guessing aspect of programming moves is also very nice, although I had Nige worried when I described the game as RoboRally in the snow. In our game, Nige seemed to get off to a good start and was able to build a stupa on a couple of the important monastery locations. Mark G lagged behing in religious influence and it became clear that he was going to be eliminated first. Political influence was much tighter with Mark K and I both controlling 3 regions and Nige could only grab two. That left just Mark K and myself in the yak battle (economic influence) and Mark K had squirreled away quite a few more of these than me 30-23, so he claimed the victory.

We all enjoyed Himalaya a lot and I can see why it got its SDJ nomination. Even Nige was ok with the programming bit so those who hate Robo Rally need not be put off. Very good.

Shear Panic
Next up was this second release by the Lamont Brothers and this time it deals with the exploits of sheep rather than frogs. The game is very abstract in play but the superb playing pieces make the game look very interesting in play.

Basically each player has a number of different moves in which they can manipulate the sheep flock’s movement. The idea is to get your two sheep in the best positions you can whenever scoring takes place. There are four phases to the game and during the first and third phases, scoring occurs at the end of each player’s turn. In the other phases, scoring only takes place twice per phase. Your choice of action also helps to determine when the second and final phase scoring takes place, so giving you another thing to think about. At the end of the game, whoever has the highest number of points wins.

This game was qute clever and a bit of a brain-burner, as players try to work out their optimum moves. However, with our group, this made the game drag on way too long and it far outstayed its welcome. Also, the game had a bit of a kingmaker problem as Mark K, who was out of the running, had to choose the final move of the flock and the result would determine whether Mark G or I won. Naturally, this meant Mark chose on the basis of Hall of Fame standings rather than optimising his own position and Mark G was able to record his first victory of 2006. In summary, cute pieces, dry game play but too long for our group to see it being played regularly. Shame, as the sheep are great.