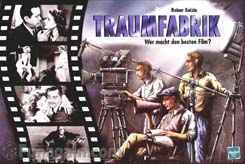 This week, we started with Traumfabrik which has not been played at the club for some while. In fact we needed to go and reprint the English rules translation as nobody could remember all the rules. Steve and Guy had not played before.

Nige was first to complete a film,closely followed by Guy and myself in the other two categories. In fact Guy’s film was an impressive 19 pointer which took best film in all three intermediate scorings. I managed to take the worst film award with just four points and managed to complete all the films I was working on. However, with only three mediocre and one diabolical film, it was never going to be enough. Guy seemed to have this wrapped up fairly easily although his margin of victory was even larger than anyone thought.

Traumfabrik remains a top-notch auction game with lots of fun casting well known actors in films they wouldn’t normally be seen dead in. Steve and Guy both rated it highly. 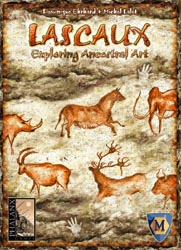 We then had a go at Lascaux by Dominque Ehrhard and Michel Lalet and published by Mayfair Games. The game is loosely based around ancient cave paintings but the theme could really be anything. However, the game play is very good and adds a bluffing element to the bidding mechanism used in Geschenkt (English edition: No Thanks!)

A set of cards gets laid out each round (normally between four and seven). Each card shows one of the cave animal paintings and two colours. Players have a set of 6 tokens, one for each colour, and places one of these face down to indicate the card colours he would like to win. Players then, in turn, have to pay a stone into the pot to stay in the bidding or drop out and take all of the stones in the pot. The others continue until there is one player left in the bidding. That player reveals their token and takes all of the animal cards showing the colour on the token. The last to drop out then reveals their token and takes any cards in that colour if any. This continues until all the cards have been taken or all the tokens revealed. Any remaining cards are left over for the next round. Rounds continue in identical fashion until all the 54 cards in the deck have been taken. Then players add up the number of animals of each of the 6 types that they have collected and the player with the most of a type scores points equal to the number of animals of that type they have. Each set of six bidding stones a player is left with gains another point and most points wins.

This is a very simple game but has some agonising choices to be made. Your choice of colour is partly determined by how far you’re going to bid and partly by second-guessing what others have chosen. Running out of bidding stones is not good as you then have to drop out quickly and it may take a while to recoup enough stones to compete in later rounds. Coming second is also tough quite often particularly if there is one key colour that the high bidders are bound to be pursuing. Remembering what animals others have collected is advisable but hard when card batches taken may include two or three different types of animal. However, concentrating on one or two types and getting at least five of them is a pretty safe option – although not easy to achieve.

In our game, Mark K got down to just a couple of chips at one stage. He did get some good cards for his expense but I thought that may have caused bigger problems than it actually did. Guy seemed to be the master of second-guessing but really only concentrated on one animal type. That said, he did get eight of them. Steve, Nige and I kept getting the poor end of the cards, spending lots of rounds where one or other or all of us came away with nothing. The final round saw Steve and I going for broke and although I got the cards I wanted, Steve got a bucketful of stones. He ended up with 4 points from stones alone. The final scores were pretty tight but Mark K got the most cards in two animal categories and with just enough stones left for an extra point just outscored Guy and Steve by a single point. We all thought Lascaux was a really good 30 minute end-of-evening game and I’m sure this one will get played quite a bit.