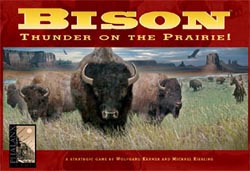 Bison is another Wolfgang Kramer / Michael Kiesling action point game that combines area control with tile placement. It is published by Phalanx in Europe with an English language version from Mayfair.

The game is played over a number of seasons (four in a four player game) and the basic goal of the game is to build up your food production capabilities. Food consists of salmon, bison and game birds and each player starts with 10 of each. During each season, food is spent to build up your presence on the plains, mountains and rivers and at the end of the season, you obtain bison, game birds and salmon based on your relative strength compared to other players in each of the respective areas. Each player performs 4 out of 6 possible actions per season, taking one action at a time sequentially, and one of these has to be to place a map tile and add hunters to that tile. The others involve moving hunters around or upgrading hunters to teepees (on land) or canoes (in a river). Players start with a few hunters and low value teepees / canoes but then has to spend food to buy more of these as needed.

At the end of the season, scoring takes place. The player with the most influence in each area receives food equal to the number of animals displayed in that area. 2nd place receives half of the total animals in the region, rounded down and others receive only the animals on the tile placed. At the end of the final season, any stocks of food are lost and scoring takes place in the same way after each animal food track has been set to zero. The player with the highest total of food for all three animals is then the winner, with ties broken using the Euphrat and Tigris method.

The game was clever and there seemed to be a lot of thought required in terms of the order in which to take actions and when to place your tile. Even though you only had one action at a time, this still led to a fair bit of downtime. Food was very tight and there was a lot of competition for control of the largest areas. We did think, however, that there was a pretty significant advantage in going last in the final round as you were able to knock others down while not then having anybody do the same to you. Nige was able to make a large swing against Mark K that knocked him out of first place in the joint largest region while bringing his own score back towards something more respectable. This enabled Steve to sneak through for the win but then he had been practicing all week. The overall verdict on Bison was that it was ok but not as good as some of Kramer and Kieslingâ€™s other collaborations. 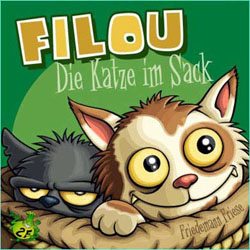 We finished off with a game of Filou (or Felix: The Cat in the Sack), a little card game by Friedemann Friese and published by 2f-Spiele and Rio Grande. This is a bidding and bluffing game that is very simple but is good fun and can be played to completion in less than half an hour.

Each player starts with an identical set of 10 cards from which one is removed at random. In each of the nine rounds, all players add one of their cards face down to the sack and the start playerâ€™s card is revealed. Players then bid on the right to acquire all the cards in the sack. If a player passes, they receive a small number of coins and another card is revealed, thus giving more information about the value of the sackâ€™s contents. When only one player remains in play, they pay their bid and receive the cards from the sack. These could be cats of positive or negative value or dogs who chase a cat away before you receive the sack, or rabbits that are worthless. After all cards have been played, the value of cats is added to your remaining coins and the highest total wins.

A bit of memory helps in this game towards the end in working out what cards are likely to be left but, as some cards are removed at the start, nothing is certain. Watching how many coins other players have is important especially if you can force them out of a bid due to lack of coins. Steve suffered from this in our game and never was able to recover. A good bluff can be very enjoyable when you know youâ€™ve put rubbish into the sack but just pray youâ€™ve not timed it when everyone has put in rubbish. Nige surprisingly came out on top in this one, although he had no idea how he had won (not that it stopped him from accepting the win). Good fun and a good selection for the end-of-evening slot.