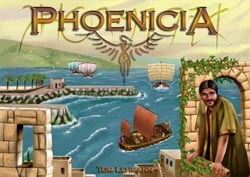 Phoenicia is a game I first tried at the first UK Expo in Birmingham this year at the JKLM stall. I thought at the time it was a good game and one that needed a number of plays as there was a number of options available in the game play to victory. I had the opportunity to play it again on Friday.

The game revolves around two concepts, one is obtaining victory points and the other is improving your production. (which is in effect your wealth) There are two ways of increasing both of these things, the first is the more mundane way and involves training and using workers, either in an hunting capacity or in a farming capacity, this gives you a steady increase in VP’s and in production. The other way is in the purchase of development cards in the auction phase. These cards are bought as either short term VP and production gains or as long term investments that gain you better options on the superior production cards that can be bought later on. The purchase of the better development cards later in the game is I believe the key to winning, the boost in VP’s gained from the later cards cannot be easily matched by workers alone. As usual with these sort of games money is tight and achieving a balance between when to upgrade and train new workers and the purchase of development cards is tricky to judge correctly.

In the initial stages of the game, I first of all trained a worker and set him to work in the field as a farmer and then got a bit lucky the following turn by getting a ‘6’ card which allowed me to get a fort development card (with it’s 3 untrained new workers) this good start along with the prior knowledge of leaving the glass making development card (a short term gain) well alone just gave me an earlier edge.

The game progressed as normal with players deciding on following one strategy or another, me and Nige (or the special one, as he is known) both decided on the city centre (2VP”s) – public works (5VP’s) – city walls (8VP’s) route and it came down to a fight for the third public works card which I took with a bid of 28! I gambled on paying all my money for this one card, immediately after getting it I thought I’d paid too much as I was unable to improve my production and that would leave me short of cash. It did however give me sufficient VP’s to put me within site of the finish line of 32VP’s. My next turn was consolidating my finances with some prudent worker upgrading and the first purchase of a VP (thanks to the city centre card ability) The last turn threw up not one but two city walls. I bid on the first and was beaten by a bid of 32, I could have bid as high as 34 with my 7 point deduction for having two public works, but I feigned not having the cash, the other city walls I then bid on and fortunately the remaining players really wanted the fleet and port cards as they had discounts due to buying the shipyard card, so they didn’t really want city walls. I was able to purchase the second city walls for the minimum 30 which gave me sufficient money to buy one more VP and win the game with 35pts.

The scores were close in the end and for one minute I thought Garry might be able to buy both the port and fleet cards to tie on 35 with me, but Mark G who’s production was very good has sufficient funds to prevent this. Ratings were 8 out of 10 from (I think) everyone and hopefully a game that will be played again sooner rather than later.