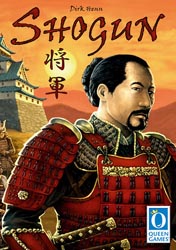 Not too many new games played this month as I was on holiday for half of it. In fact, there were only two: Candamir, which we played at the start of the month and Shogun, which was at the end. It could be argued that Shogun is not a new game, as it is a re-make of Wallenstein set in Japan but it’s such a long time since I played the earlier version that the new one felt new still. Neither Candamir nor Shogun quite hit top notch for me but both are pretty good, with Shogun getting the vote by a smidgen.

The holiday saw me playing older games like Diamant,Â ColorettoÂ and Zero but the highlight of the month was getting re-acquainted with Wyatt Earp and teaching it to Jan and Chris – both of whom liked it a lot. It is a very nice game and we will have to play it on games club night soon.