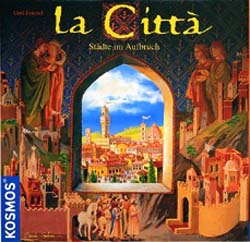 I wasn’t able to make it this week but Steve sent this report.

The first game played this evening was La Citta. This is a game that revolves around building cities.

We all initially looked for suitable starting places for our first two cities. Mark G positioned both of his cities in the centre of the board; the rest of us went for a mixture of positions. The game then started with all of us expanding our cities to claim the best possible choices of terrain to feed our citizens and with one eye on the type of city tile that was going to be popular with the citizens that year. It is the popularity of the city that is the key to this game, as at the end of a sequence of turns the citizens cast their gaze towards cities within 3 hexes of their own that provide the things they are looking for. Itâ€™s a bit like an election, but the populace quite literally vote with their feet and move to the city they like.

My strategy was to create a mega city full of different tile types that would draw in the citizens of all the surrounding players and have my second city as a kind of farm producing food for the ever-growing populace. The feeding of your citizens was for me always a problem. My success with the popularity of my large city was tempered with the fact that I suffered the penalty of lost action cards because I couldnâ€™t feed all of my people. But overall I was willing to put up with this fact, as my large city had become a citizen black hole, expanding in size and swallowing up citizens at an alarming rate from an increasing amount of surrounding cities. As an example of this a new city started by Mark K that initially was at a safe distance from my metropolis soon come under the influence of it and as a result became another feeder city for me. Mark K decided to abandon the city after that and relocated it to a safer part of the board. Both Phil and Mark G lost people, although Mark G held off losing people for some time with a prudent selection of tile types. Ultimately my metropolis was considered by the others to be unbeatable and after 2 and a quarter hours the victory was mine.

I think that the length of the game was a little long for some people, but I didnâ€™t find it to bad and didnâ€™t realise how long we had been playing, which is usually the sign of an engaging game. Itâ€™s also not difficult to learn and with a different board layout each time it has a replay-ability factor.