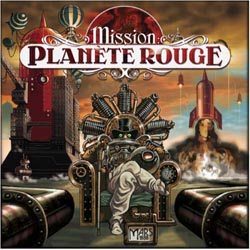 Although there were five of us tonight, John was busy on the phone for the first half of the evening so four of us tried the brand new Asmodee game, Mission: Red Planet by Bruno Faidutti and Bruno Cathala. And what an excellent game it is too.

The game is about sending astronauts to Mars and exploring the various regions for precious resources. Whoever is the most prolific explorer in each region at the end of rounds 5, 8 and 10 score victory points, more points being available as the game progresses. The mechanics are sort of a Citadels meets El Grande combination, which works extremely well. Each player chooses which of their 9 characters to utilise on a turn and once used, the character cannot be repeated until you pick the weakest character, the Recruiter, to bring all your characters back into your hand. Once everyone has chosen, each character gets actioned in a set order (as in Citadels) and this is where the fun really sets in, trying to work out what others are playing as earlier characters can impact on whether a later character can carry out its action or limit its effectiveness. The actions determine how many astronauts you are able to load onto a rocket that turn and give another effect to help you or hinder others. Once everyone has taken an action, full rockets are moved to a set region of Mars and the Astronauts deposited there. At the end of rounds 5, 8 and 10, whoever has the most astronauts in each region gets to collect the resources (victory points available there). After the tenth round, certain bonus points are awarded for fulfilling secret missions or making certain discoveries in the outer regions of Mars and then, whoever has amassed the most points wins.

This is a really interesting game with players faced with lots of gut-wrenching decisions, trying to take into account what others are doing. It really did have us engrossed throughout the game. Turn order matters more than at first seems apparent and timing when to use the Recruiter is an important aspect. Being our first play, none of us quite appreciated how things would develop and Iâ€™m sure a second game would see us all building on what we learnt from the first game. After the second scoring, it was interesting to note that three players were tied on 15 points with the fourth on just 6 but having an almost insurpassable lead for the 9 bonus points for most ice crystals. As it was, the Utopia region was critical in the final stage and Mark K engineered a majority, which was supplemented by a very useful Discovery tile to add to his points.

Mission: Red Planet is one of the best games weâ€™ve played in 2006 (Nige was certain it was his favourite by far and promptly ordered a copy). It took us about 90 minutes but the first few turns were slow as we were getting to grips with the various character abilities: 60 minutes is probably not far of the mark once everyone knows how to play. The only thing that irritated me was the box insert was designed to hold the contents in place before all the bits were punched out and had absolutely no use for storing the various pieces once the game had been played. A very silly flaw that I would never have expected to have been overlooked. Still, that one niggle aside, a beautifully engineered design that we will certainly be playing again soon. 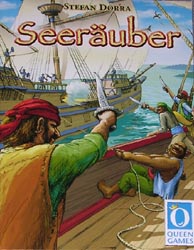 John was then able to join us for a first outing of Seerauber by Stefan Dorra and published by Queen games. Yet another pirate game, this sees players assembling a crew to attempt to raid various sized ships to plunder their treasure. However, treasure isnâ€™t the main goal in the game, itâ€™s money. This is because when a captain raids a ship, he has to pay wages to each of his crew. Players each have pirates that demand wages of up to 5 ducats. The raided ships have a certain amount of money but, if there isnâ€™t enough to pay all the wages, the captain has to fork out the remainder from his own pocket. There are 5 rounds, during each of which 3 ships are boarded. After the last round, whoever has the most treasure of each type (candlesticks, cutlasses etc,) receives additional ducats but then, whoever has the most money wins.

In our game, Mark K got off to a very good start and was able to captain two raids that brought him treasure without paying out too much in wages. In the middle of the game, Nige â€œtrappedâ€ a goodly number of high-wage pirates that he declared he would hold onto and never board a ship (depriving those pirates of any future wages, as they only get paid when a ship is raided). Well, the rest of us thought otherwise and by covering Nigeâ€™s other pirates, forced him to board a ship and pay out about 10 more ducats than he gained. As this was going on, I became captain of a large crew, knowing that a lucrative ship was still to appear and gambling that it would come out on the penultimate round. I failed, as only modest ships appeared and John, who had three pirates on my crew, was able to mutiny and force me to board a ship, costing me a massive 16 ducats. I wasnâ€™t pleased although everyone else found it to be highly amusing. By the end, Mark K was able to capitalise on his early fortune to run out a very easy winner.

Seerauber started off appearing a bit bland but, as time went on and the attempts at stuffing other players became more frequent, it got much more interesting. There is a memory element, which isnâ€™t really my cup of tea, but it played pretty well and everyone was occupied throughout. A pity Mark K chalked up a second win but I guess it puts a bit more pressure on Steve in the Hall of Fame.