If May was a slow month of gaming then June turned out to be glacial as the unusually pleasant weather and a two week holiday saw me tied up doing lots of other things. Consequently, I only managed to play 7 games of 7 different titles, with 2 of them being new to me. The new games were:

This was a really great surprise as I wasn’t expecting too much from it but it definitely worked fantastically well for me. I’d describe it as Knizia’s take on Liar’s Dice / Bluff, although with cards rather than dice. Revealing a card gives everyone more information but you have flexibility in upping your bid to any of the seven different suits / colours. Production quality is only so-so – the cards are fine but the box and board detract from the overall appearance. Not sure why this wasn’t picked up by one of the usual German producers.

Sakura is another push-your-luck game from Reiner Knizia where you use cards to move the player pawns and the emperor with a view to getting your pawn closest to the emperor when he reaches a scoring space without bumping into him beforehand. Fun and quick but not one of his top-rier games. Will definitely play from time to time but it’s not likely to be a regular.

It was nice to get a bunch of card games that haven’t been played for a while back to the table. Al Capone may be my favourite in the Mystery Rummy series but I probably should play all of them again to check. Also, Habe Fertig seems to have been overlooked by many but it is another brilliantly simple card game by Steffen Benndorf.

I added 4 new titles to the collection: Mondrian: The Dice Game, Icarus, Sakura and Lost Cities: To Go. I also reacquired three games and parted company with four, which means my total collection now stands at 568.

My list of unplayed games is up from 2 to 3 and my Game of the Month was Icarus, which turned out to be a fantastic variant of Liar’s Dice / Bluff. 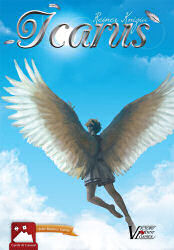