In advance of my house move out of the area and the fact that, from July, my ability to host / attend the club is likely to be even more limited, I thought it was time to transfer how we record the games we play to BGG. This will allow anyone (not just me) to record the information about games played (scores, ratings etc.) and add comments about anything noteworthy from the session.

Therefore, I’ve set up a geeklist and added the games played since 1st June. Anyone who fancies adding comments to those games is very welcome to do so. And, of course, anyone can add sessions that I don’t attend. Here is the link to the geeklist.

I suggest you add it to your quickbar at the top of the BGG page because it will soon disappear down the list of recent geeklists.

What we will lose is the Hall of Fame standings but that can’t be helped, so bragging rights will become a thing of the past (Ha! I’ll believe that when I see it).

If anyone has any suggestions or improvements to this, let me know and I’ll see what I can do. I didn’t want to make it difficult for people to add information so kept the layout simple but there’s no reason why it can’t be changed if anyone wants to suggest something.

This week, I got hold of three new games. The Last Spike is one I’ve been interested in for a while due to comments from geek buddies, Doug Adams and Mark Johnson. It looks like an interesting take on Acquire with a railway building theme. Onitama is a two player abstract played on a 5×5 board where you are attempting either to capture the opponent’s king (sorry, master) or get your master onto the opponent’s home space. However, your movement is limited by the cards in play and there are only five in play and once you play a card, it gets passed for your opponent to use. Finally, Broom Service: The Card Game is a simple set collection game using the brave/cowardly mechanism from the parent game. It also comes with a mini expansion for the board game. 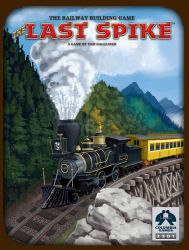 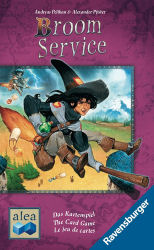 I managed to get to the UK Games Expo for a few hours on Saturday morning. Pity it couldn’t have been longer but I had other stuff that needed doing in the afternoon.

Arriving just before 9.30, having parked in the train station car park, I joined a really slow moving queue to buy tickets. 45 minutes later I eventually got into Hall 1 of the NEC. First impressions were that this was much better than at the hotel with wider aisles and much more of a feel akin to Essen – still not the same scale but more of a convention feel than previous years.

First stop was the Surprised Stare stand where Tony Boydell was busy demoing Guilds of London. I was nervous that he might have sold out before I got there and I arrived with his stock level down to the last half dozen copies (of the 240 he brought to the Expo) so I grabbed a copy and handed over the cash to one of his crew before saying hello to him and passing on a copy of a game he’d bought from me in a recent auction. Turns out I needn’t have worried as he’d put back a copy for me – what a great guy.

I then meandered my way through the halls, which were busy but not so congested you couldn’t move, which was a big plus. I made my way over to meet Gil Hova and pick up my kickstarter copy of The Networks, one of a very small number of games I’ve backed on KS in the last year. He’d flown a batch of the game over to the Expo, in advance of the main distribution – which is probably 4 weeks or so from being delivered – and his stocks were looking very low so I’m glad his trip to the UK seems to have been worth it and I get to try the game a bit earlier than would otherwise be the case.

The rest of my brief time was spent looking at a couple of upcoming games, Costa Rica and Fight for Olympus from Mayfair Games, both of which look interesting; listening to an explanation of Ravens of Thri Sahashri which I thought sounded a nice unique two-player game that Jan might enjoy but ended up deciding it was just a bit too gamery for her tastes; and talking to various people I’d not seen for a while – Andy Powell about Automania which sounds pretty good; Paul Lister at Boardgameguru and the guys at Gameslore who seemed to be constantly busy selling stuff.

I also returned to catch up with Tony Boydell for a chat, him having by then sold out of Guilds. I timed it very well as he was being shown a homebrew version of Shephy, with illustrations that are a bit more child friendly than some of the original Japanese version. These were done by a lady called Helen, who is one of Stuart Burnham’s friends, and they are fantastic and lots of them very funny (Stuart wrote about it here). And talking of Stuart, where were you? I thought I was bound to see you with there not being many people about.

Tony also quizzed me about selling Keydom and I admitted that it is likely to be auctioned off before we move house (hopefully sometime over the summer). With all his Guilds of London money, I’m hoping for a decent bid when it goes up

All in all, a nice morning and a successful one as I managed to resist buying too many new games.

May turned out to be a pretty barren month for game playing as I only managed to play 11 games of 11 different titles, 7 of which were new to me. The new games were:

Madame Ching – Nice set collection and hand management game that plays well with two. Nothing very innovative but it is easy to pick up and plays fairly quickly.
Arboretum – Tricky card game where you need to balance playing cards into your arboretum with holding them back to ensure you score those trees. Probably better with more than two players but the choice over which card to discard may be more critical with just two.
Sapiens – Puzzle game of fitting domino-like tiles into a grid to score the most points. Unfortunately, I found this rather uninspiring and, although it works, it didn’t work for me and I’ve already sold it on.
Histrio – Good hand management game where you are trying to collect the best entertainers to suit the king’s mood. A nice second-guessing game, using the familiar action card mechanism from Mission: Red Planet, beautifully produced but not going to set the world alight as it doesn’t have anything to make it stand out, gameplay-wise.
13 Days: The Cuban Missile Crisis – This is a very good streamlined two player card-driven game akin to Twilight Struggle or 1960 but playing much quicker. I really like the need to balance getting the most influence in key areas with not setting off a nuclear holocaust.
Imhotep – Excellent game of trying to move your building blocks onto the right monuments to score you most points. Very easy to pick up but with plenty to think about from the limited action choices you have. And it’s easy to mess with other people’s plans. Not surprised it got a Spiel des Jahres nomination as it meets the SdJ criteria very well.
Bohemian Villages – Uses the Can’t Stop mechanism of splitting four dice into two pairs to claim buildings in villages and collect the most money by the end. Very good light strategy game that plays very quickly with lots of different paths to pursue to get money.

I sold 17 games and added 4 new games to the collection: 13 Days: The Cuban Missile Crisis, Histrio, Imhotep and Bohemian Villages. My total collection stands at 568.

My unplayed list is down from 3 to zero, (hurray!) and my Game of the Month was Imhotep, although 13 Days was a close second and Bohemian Villages was also in contention.