In April, I managed to play 42 games of 32 different titles, with 10 of them being new to me. The new games were:

Excellent solo /co-op dexterity game where you build a temple over several levels, following the instructions on various order cards. You have to build up to a certain level, depending on how hard you set the game up to be, but you can’t just stop there. The game ends only when all the temple platforms have been used, all the order cards had been attempted or you suffered a collapse. Really enjoyed this.

Very clever and fun game where you are trying to grab object tiles before anyone else once two of the same have appeared on the cards that get revealed. But there are 36 different objects to keep track of and many of them look similar. If you make a mistake, you score nothing for the round, otherwise you score a point for each correct tile you grabbed. After the first round, you’ll find it difficult to remember if you saw the same object in the current round or a previous one.

Wolfgang Warsch is on a roll this year. As well as The Mind, this is another great estimation game where rather than judging time, you’re estimating how large an area a particular colour appears on a card compared with others previously played. Think Timeline where you have to slot the card into the right place in the line to keep the order in ascending sequence of area covered. Really simple and some tough choices at times.

Billed as Terra Mystica in space, this is an apt description and it plays pretty similarly. The solo game is very well integrated and there appears to be lots of variety to keep the replayability up. Impressed with this.

An asymmetric two player game from the two Brunos with a nice Jurassic Park feel. One person plays the scientists trying to capture the baby raptors; the other plays the raptors trying to get the babies to safety or munch on all the scientists. Some nice second-guessing each round with the lower value card playing first for their special ability while the higher card gets to do multiple standard actions based on the numerical difference between the two cards.

Another light dice game from Reiner Knizia that is a yahtzee-like push your luck game to gain the most treasure. Works well as a family game and is very nicely produced.

A solo or multi-player deck building game where you are fighting off the zombie hordes while trying to fulfil the objective of the particular mission you have selected for the game (and there are sixteen missions in the box so plenty to get your teeth stuck into). And the missions seem hard (apart from the first which is a gentle introduction). Not seen too much written about his, which is surprising as it’s designed by that guy who produced the fairly popular terrafroming game set on Mars.

Alexander Pfister turns his hand to a push your luck game and it works very well. Try stealing cards from your opponent without drawing a duplicate. Stop at the right time to add the cards to your collection and win the game by being the first person to get six cards of the same value in their collection. Simple, some light take-that gameplay and good fun.

This is a rethemed version of Pingu Party with Game of Thrones characters instead of the cute penguins. The characters don’t matter at all; it is just their house (colour) that is important in determining whether the card cant be added to the pyramid of penguins (sorry, Westeros royalty). Solid game but I’m sad I don’t still have the penguin version – even though I do like GoT.

Solo / co-operative game of fighting off aliens in a series of mission scenarios. Seemed really hard but the dice allocation mechanism for various actions didn’t really grab me. It works but it didn’t get me invested in what I was doing. I’d much rather play Space Hulk: Death Angel.

Still enjoying playing lots of older, shortish games and experimenting with solo variants of Cinque Terre, Romisch Pokern and The City. It was also good to get Loyang back to the table, as well as a few more Knizia’s – especially Africa, Marco Polo Expedition, Kreuz & Quer and Cheeky Monkey.

I added 9 new titles to the collection: Gold Armada, Gier, Deja Vu, Menara, Game of Thrones: Westeros Intrigue, After the Virus, Raptor, Professor Evil & the Citadel of Time and Illusion. I also reacquired ( 3 ) 4 games (Through the Desert, Loot, Kreuz & Quer and Orongo), which means my total collection now stands at 551.

My list of unplayed games is down from 2 to 1 and my Game of the Month was a new entry in the Zoch wooden block building series, Menara.. 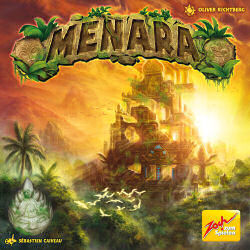