Pandemic Hot Zone: North America arrived today so I set up a quick game using Dispatcher & Generalist. Started off ok, curing the red disease, but then things got really tight and I ended with the final yellow cure’s cards in the wrong hand and a fourth outbreak sealed the loss. pic.twitter.com/AZGe6NFUZ7

Tried the new official solo variant of 7 Wonders Duel this morning and it worked very well. Chose Cleopatra at random from the 5 available opponents. She very nearly claimed a military victory in Age III but I prevailed with a civilian victory 91-80. pic.twitter.com/7GB0RTNGei

Another play of Run, Fight or Die Reloaded, this time playing as the Army Vet. Managed to get to the Town Line, having evaded the Mutant Zombie once, and rescued the Paranoid Recluse and Sassy Homemaker. Scored 18 points. pic.twitter.com/bijn32gdsg 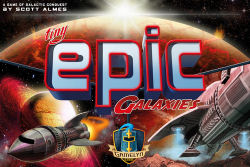