During October, I managed to play 17 games of 15 different titles, with 5 of them being new to me. The new games were:

I was expecting to like this and wasn’t disappointed. Part race game, part set collection, with a nice light hand management / movement system and it works well with two. We really enjoyed this and I can see why it got a Spiel des Jahres nomination.

Bandido is a simple solo puzzle cardgame that can also be played as a multi-player co-op. The cards create a maze of tunnels with a number of dead ends and you are trying to close off all the tunnels to prevent the bandido from escaping. There is obviously some luck in how soon the dead ends appear but my game went the distance (with me losing) and it takes a surprising amount of table space by the end. Good for an occasional play but it might get samey if played lots of times.

This is another nice commercial tie-in with a decent game behind it. As it’s from USAopoly, it draws comparisons with Hogwarts Battle and it holds up well but doesn’t have the same aspect of ramping-up over several games. It is a bit less complex than Harry Potter but still presents a tough challenge. As fans of the film, it worked nicely for us.

A print and play solo microgame, this is a clever 5-10 minute puzzle with a beat your high score challenge. This is a game that can go anywhere with you as it’s so compact and I’m really enjoying it so far.

Dragon Master is the same game as Knizia’s Robot Master but using a 4×4 grid rather than 5×5. Perfect for a quick two-player match where your card play is all about helping yourself more than your opponent and hoping not to get screwed at the end of the game.

Had a ten player game of Dixit while away in Abu Dhabi with work colleagues and glad they all enjoyed it. Ten players is probably a bit too many but, as I couldn’t get hold of a copy of the 12 player version of Telestrations, I settled for this being simple to explain and a way of keeping everyone involved. It was also nice to get Star Wars: Angriff der Klonkrieger on the table again. This is a fine co-op from Inka & Markus Brand and works well as a solo game.

I added 9 new titles to the collection which were Luxor, Flamme Rouge: Peloton, Dragon Master, Thanos Rising: Avengers Infinity War, Dixit: Odyssey, Karate Tomate, 3×8, Lifestyle and Bandido. I also reacquired the new version of Mosaix, which is now called Te-Trix, and this means my total collection now stands at 607.

I have 3 unplayed games (none at the start of the month) and my Game of the Month was the Spiel-des-Jahres nominated game, Luxor. 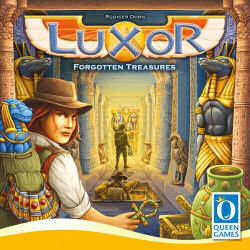