During September, I managed to play 37 games of 32 different titles, with 9 of them being new to me. The new games were:

Four different sets of dice to pit against the villains linked to the various DC heroes. Each set plays a bit differently and works reasonably well but I wasn’t feeling enough to persuade me to play any of the sets again.

Fabulous new token placement game from Reiner Knizia, reminiscent of Through the Desert but with a Feldian multiplicity of scoring methods. Really enjoyed this.

Having released Keydom from the collection, I managed to grab a reasonably priced copy of the Rio Grande revision to see how it compared. Almost identical and good fun.

Another updated version of an older game, this time Favoriten being turned into a donkey race. Very little different from the earlier version and again good fun. Glad to have got this back in the collection.

A simple numbers game like Straw but where only the one person who holds Zeus wins the round and advances towards the four winning-rounds target. Good but, given a choice, I’d much rather play Straw.

A dice rolling game where you need to roll and land your dice on the right areas of the grid of cards. But each die needs to be launched onto the play area in a different way: right and left handed rolls, a blind roll, a flick and a drop. Quite good fun but a bit random if you’re not very dexterous.

So far this year, I’ve played 267 games of 176 different titles. My most played are:
Cucina Curiosa 7
Onirim 7
Verflucht 7
After the Virus 5
Exxtra 5
The Game 5
The Mind 5

I added just 4 new titles to the collection which were the four Justice League: Hero Dice titles. I also reacquired Knizia’s Palazzo which means my total collection now stands at 597.

I am back down to zero unplayed games (5 at the start of the month) and my Game of the Month was another Reiner knizia game, Blue Lagoon. 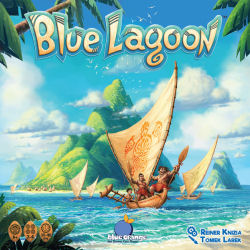