May turned out to be a slow month of gaming and I only managed to play 23 games of 23 different titles, with 8 of them being new to me. The new games were:

This is a terrific solo/co-op game with some decent differential abilities for each character and constantly having to choose which of two cards is best to utilise. And Professor Evil moves unpredictably to mess things up (although in my game he was Professor Slow and didn’t hamper me too much). Really enjoyed this.

Now this is on kickstarter for a few more days but I printed out the map and played along with one of the run-through videos. Reminded me of Trans America but as a roll and write game and it was an excellent puzzler with lots of tough choices, which become more critical as the game gets closer to the end. Very good and may well back this. As it’s a pre-release game, I ruled that it couldn’t be considered for game of the month but it has a strong chance when it is finally available.

Rather than roll and write, this is draw and write (as in card draw) and this again provides an excellent puzzle in trying to work out which of three of the available options moves you closer to your scoring objectives. Like Ganz Schon Clever, you’re juggling how best to score and it works really well.

This is an older Reiner Knizia game that is a bit different from his normal stuff, in that it is a speed pattern recognition game. Each turn, you try to either match the three cards you draw to three cards in the centre, in which case they cover the matching cards, or match fewer than three and place the remainder to the bottom of your deck. If you’re unlucky, yo can do neither and just put all three to the bottom of your deck. Once a player has fewer than ten cards left, they call Toppo and end the game/round. I’m not a big fan of speed games, but this worked pretty well.

Found a cheap copy of this and decided to give it a try. Although I’m sure the full game with deck construction is more satisfying in terms of game variability, this starter game works very well and we had a nice battle that turned out to be quite close. The dual objectives of dealing damage to an opponent while not burning through your deck too quickly means the strategy isn’t immediately obvious.

Great dice management game, where you’re looking for area majorities to claim pieces of pizza, cake and cheese to score the most points. The placement restrictions are the thing that make the game interesting but you’re still left to the roll of the dice to determine how successful you’ll be. Surprisingly quick game with two players.

Is this Sushi Go for those with a sweet tooth? Yes, in terms of the set-collection, but this is a second-guessing simultaneous-reveal mechanism rather than card-drafting. You’re still watching for what others are collecting but there’s more groaning when you pair up with another player going for the same card so both come away empty handed. Good fun.

This is a card game version of the terrific Amun Re board game, which maintains the main feel of the game and the changing epochs in particular but without the board positioning. It incorporates a different but nice constrained auction mechanism as you can only bid with a single card; you can’t add more cards, only replace with a higher card. Not sure it would work as well with two but three definitely works and four or five may well be better.

I’ve enjoyed revisiting several short and simple games this month. Roll and write/score games have featured prominently with Kokoro, Wurfel Bingo and Kribbeln getting back to the table. Some of my reacquisitions proved to be good decisions with Oceania, Callisto and Forbidden Desert all justifying their place back in the collection, while Kreuz & Quer (Connections) continues to frustrate (in a good way) with my inability to score well.

My list of unplayed games is up from 1 to 2 and my Game of the Month was Professor Evil and The Citadel of Time, although I very much enjoyed On Tour but that isn’t officially released yet. 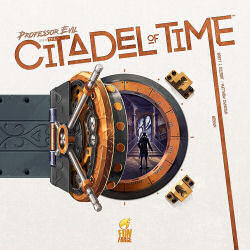