The results of the German game of the year awards were announced this morning and the winners were:

By some strange coincidence, these are the games I predicted would win yesterday. That doesn’t happen very often. 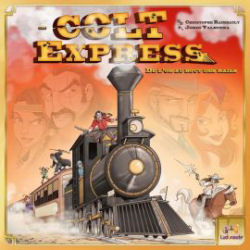 The awards for the Spiel des Jahres and Kennerspiel des Jahres are announced tomorrow morning. Here is my speculation about which of the three nominees for each prize will be celebrating victory.

For the main award, I’ve played all three nominees: Colt Express, Machi Koro and The Game… spiel so lange du kannst! All three are fun games that I could see as a good  choice but I don’t see The Game… as a serious contender. It’s a small card game, has little expansion potential and doesn’t do the “co-op with limited communication” genre as well as Hanabi (even though I prefer it to the earlier game). Of the other two, I’d like Machi Koro to win, as it’s a fantastic light game where the dice rarely do what you want them to, but I think the toy factor of the three-dimensional train will get the nod for Colt Express.

Unfortunately, I’ve only played one of the KedJ nominees: Elysium. As a next step up game, it fits the criterion really well and you can see plenty of potential for expanding the game – even though that’s something I don’t really appreciate. Orleans has the bag-building mechanism that was the novelty of Essen last year and seems a pretty solid game, whereas Broom Service was a surprise nominee to me (and a lot of other people) as it is a re-working of Witch’s Brew but it does seem to add a bit to that earlier game. I really am having difficulty judging what the judges might be looking for from these three nominees so I’m going to say Broom Service, as I hope it makes what was already a fun game even better.