In January, I managed to play 33 games of 17 different titles with 3 of them being new to me.

This is a great co-op/solo game set in the Legends of Andor universe. Each of the six locations in the castle of Rietburg has a task you need to fulfil and you win by completing four of them before the evil dragon awakens and swoops down to destroy the castle. But you first have to uncover and overcome various monsters and collect treasures at the location before the task is revealed. It is a hand management game at its core with each hero having different abilities and the game adding extra obstacles each time a hero empties their very sparse deck of cards. Really enjoyed this and am keen to try all the various (six) heroes.

This is a brilliant pure solo game of space invaders played with dice and a board. Each turn you use your dice to research the invaders, develop your underground base’s capabilities and shoot alien ships out of the sky but the dice also move the ships down onto the city causing damage and the mothership descends incessantly towards the Earth. Complete your research before the city receives too much damage or the mothership lands. The dice rolling, allocation and re-rolling mechanism is quite clever and there are tough choices on every turn. There is also a campaign mode, which looks very interesting, but even the standalone modules have plenty of variety and difficulty levels to ensure lots of replayability. Very impressed with this.

This was a surprise arrival as it came out of a kickstarter campaign that went wrong but the creator has eventually delivered. And its a fun roll and write game designed by Reiner Knizia based on the video/phone games Centipede/Snake. You draft dice from a pool to move your worm over sets of fruit and planets while avoiding running off the board or over your existing route (which loses you a life). Lose 4 lives & the game ends immediately. You then score points for complete sets of fruit (and bonuses if you ate a fruit with the matching coloured die); extra points for any lives remaining and lose points for any planets you didn’t visit. Works very well and plays quickly but not sure it’s one you’ll want to play over and over (although I may be wrong).

With Robinson Crusoe returning to the collection this month, I managed to get in a few games and actually succeeded in wining one. Marvel Champions is still getting played a fair bit and I had some fun solo’ing Snow Tails and Burgen Land, both of which worked quite well.

I added 3 new titles to the collection which were the three new games mentioned above. I also reacquired 3 games and parted company with 7 so my total collection now stands at 694.

At the end of January, I still have no unplayed games (0 at the start of the month) and my Game of the Month was an easy choice and I fully expect it to be in my top few games of the year: the excellent Under Falling Skies 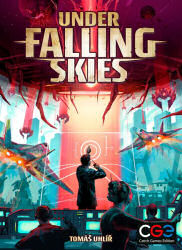