During November, I managed to play 27 games of 21 different titles, with 6 of them being new to me. The new games were:

Another roll and write game in the Qwixx and Qwinto family but this one doesn’t work as well. Admittedly, I’ve only played solo but there seems very little you can do to mitigate the luck of the dice rolls. Tried a couple of tweaks but I think I’m done with it and I don’t think the ability to leach numbers in the multi-player game will change things enough for me to rather play something else.

This solo print and play is pretty good and I like that the cards have the goals on the back of the cards, which changes the distribution of cards to be played when they are drawn as objectives. Very neat puzzle and quite hard on my first couple of plays.

Nice tile laying family game with a bit of push your luck in the dice rolling and cursing towards the end when the tiles don’t fit in your remaining spaces. Not a great game but one that is easy to get the family to play.

Another in Amigo’s line of number card games, where this time you’re in a race to build three columns of eight ascending number cards. This sort of worked but Jan had a few difficulties with how the card manipulation worked (not that it’s difficult; she probably just wasn’t in the mood to work it out in her head). However, the game is still distinctly average. It works but not terribly fun and the blocker cards seemed a bit pointless really.

Another small Amigo card game but this one surprised me as I wasn’t sure it would work. However, it did play pretty well and the combination of pushing your luck in determining how many cards to add to your die row and being able to manipulate the dice rolls with the sports cards made for a nice card management game, while trying to get the right sets of cards to score well. Jan and I both liked this. Not sure if the “Love” cards can skew the game if someone is fortunate that they turn up when only you can grab them but everyone should be watching out for these doublers.

This is Tetris the roll and write game and is another nice puzzle game from Wolfgang Warsch. Not as good as Ganz Schon Clever but still pretty good. The tension increases towards the end of the game as the available points at the top of the grid is higher but not being able to fit a “tile” is disaster as it’s game over. Better hope you’ve got enough energy points left to manipulate the tile. Very good.

It was nice to get games of Whacky Wit, Flash Point: Fire Rescue and Witch of Salem to the table this month. Also managed my best score in Kreuz & Quer (Connections)this month (5 points), only to discover Laszlo’s wife and daughter regularly score in the range of 2-4 points. Obviously need to keep practicing.

I added 3 new titles to the collection which were Brikks, Qwantum and Outback. I also reacquired Steam Time for just £10 in The Works’ latest strategy game sale, and this means my total collection now stands at 611.

I have 1 unplayed game (3 at the start of the month) and my Game of the Month was tough to choose as there wasn’t really any game that wowed me. In the end, I was switching between Sprawlopolis, Outback and Brikks but eventually decided that Brikks probably just had the edge. 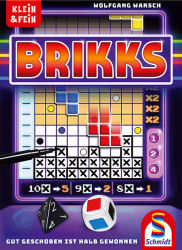