In February, I managed to play 77 games of 12 different titles with 2 of them being new to me.

Solo sports replay game using stats for real NHL teams with a choice of playing the game using dice and charts or fast action cards. The cards work well and a match can be completed in 15-20 minutes with the game producing details of goal timings, scorers and assists, penalties, goalie stats etc. Pretty good but not my favourite of these sports replay systems.

Last year’s Kennerspiel des Jahres is a co-op game set in the stone age where your tribe is trying to survive long enough to complete a cave painting with a novel card management mechanism and a mix and match module system to create different scenarios. Only played once so far, solo as two players, but I liked the way the game played although piecing together how to play was a bit tricky first time around. Need to play again soon.

I added 1 new title to the collection which was Shoot-Out Hockey so my total collection now stands at 743.

At the end of February, I have seven unplayed games (eight at the start of the month) and my Game of the Month was Paleo. 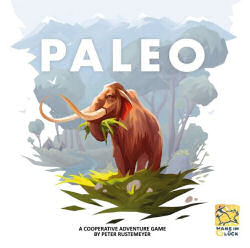