In October, I managed to play 71 games of 41 different titles and 3 of them were new to me. The new games were:

I finally managed to play Reiner Knizia’s Babylonia which has reminiscences of Samurai and Through the Desert but it is definitely its own game. I really liked it as it has enough to think about in terms of different turn options and routes towards generating victory points but without being overwhelming and all wrapped up in a 30 minute (with two players) timeframe. Excellent.

Gamewright have a knack of picking up very good family weight games and this is another one where you are co-operatively trying to play cards onto four stacks to achieve a certain number of goal cards before the draw pile runs out or a player cannot make a valid play. Really easy to teach and has a mild element of restricted communication allowed to give players hints about where you want to play (like The Game). Very good and, with differing levels of difficulty in the number of goal cards you need to complete to win, this should present a challenge for some time.

The third iteration of That’s Pretty Clever! plays very similarly to the other versions and works just as well but there is a greater focus on chaining the bonuses in the latest instalment. I enjoyed it as a solo game but haven’t yet played it multi-player.

This is Pride & Prejudice the card game and is a light set-collection type game with your play on a turn determined by an event deck so has limited choices to be made. That said, the theme carries it along and it is as much about the role playing as the result at the end of the day. Fun.

This is a quick solitaire print and play using a standard deck of cards, which is like card patience with a twist. The play area is made up of five columns each with a given rule when cards are played there. You play cards individually to your choice of the five columns and once a row is completed (after five cards have been played) see whether any of the cards breaks a rule. Repeat for 10 rows and if you haven’t broken too many rules by the end, you win. A fun five minute diversion.

Managed to finish off our My City campaign this month, which was very enjoyable, while we’re still stuck on Monster Box 3 of Hogwarts Battle. Also returned to some solo games not played in a while, especially Aquaducts and After the Virus.

I added 2 new titles to the collection which were Babylonia and Cahoots. I also sold 12 titles so my total collection stands at 689.

I now have 1 unplayed game (2 at the start of the month) and my Game of the Month was Babylonia. 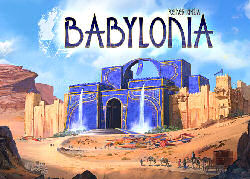