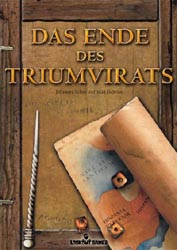 There were only three of us this week so it was the perfect opportunity to try out The End of the Triumvirate, which has been waiting for ages to get to the table. This is an interesting light war game, where there are three routes to victory: military, where you manage to gain control of 9 areas; political, if you get elected to the senate twice; and competence, when both your military and political standing have reached a certain level. Each player represents one of the major Roman figures of the time: Julius Caesar, Pompeiius or Crassus.

A playerâ€™s turn is made up of three phases. Firstly, the areas you control generate supplies of troops and/or gold, plus you get a couple of bonus supplies from Rome. Then you get to move troops around the board and battle for control of the areas. Finally, you get to spend gold to perform up to three actions, depending on the type of area in which your character piece ends its movement. These will be to improve your military or political standing, to buy weapons to help in future conflicts, or to rally support from the citizens for the next election.

The starting positions and initial supplies push each of the characters down different strategies. Julius Caesar (Mark G) is slanted towards the military option and he took full effect on the first turn by blitzing one of Pompeiiusâ€™s (my) regions. This seems the obvious first turn and immediately put me on the back foot. As supplies are dictated by the areas you control, losing one before you begin seems harsh and I felt forced to retaliate despite Mark Gâ€™s military superiority. Going for Crassus (Mark K) instead might have been an option but that would have just left Mark G even stronger for his next turn. Crassus is suited to the political track and Mark K followed that route very successfully while I was the whipping boy in the middle. Mark K won the first year election and I knew he looked strong to continue his political domination. However, my pleas to warmonger Mark G, that he should turn his attention to cutting down the other guy, fell on deaf ears and Mark K ran out an easy winner at the end of the second year.

I enjoyed Triumvirate but am struggling to see how Pompeiius gets a decent foothold. Iâ€™d very much like to try again as the game plays really nicely with some good ideas but, taking only three players means its opportunities are going to be limited.

We followed up with a short game of Flaschenteufel, the Bottle Imp. This is a very good trick taking game where you want to take tricks with high cards but not with low cards. One card represents the Impâ€™s number (starting at 19). Providing all cards played are above that number, the winner simply takes the cards into their score pile. However, if any card in the trick is below the Impâ€™s number then the trick winner is the player who laid the highest card below that Imp number. They take the cards into their score pile but also take the Impâ€™s bottle and the card they won with becomes the new Imp number. Whoever has the Impâ€™s bottle at the end of the hand scores negative points rather than positive so you want to avoid that if possible. But, getting rid of low cards without taking the Bottle is tricky and calls for good judgement.

After an aborted first round where I had completely misunderstood the Imp rule, we played three rounds, each becoming more interesting as we got to grips with the slightly twisted trick winning rules. You certainly have different things to think about when evaluating your hand, compared with most trick-taking games. I managed to avoid taking the Bottle each time and ran out a reasonably comfortable winner. I love these clever little card games and Flaschenteufel is certainly one of the better ones. Excellent stuff.

This weekend sees the newest UK convention kick off. The Cast Are Dice takes place on 12th and 13th August at the Regent Theatre, Hanley, Stoke-on-Trent.

The idea behind The Cast are Dice is to create an accessible and friendly gaming weekend, with the emphasis heavily on board and card games. Loads moreÂ detail including registration and hotel info is included on the website here.

Unfortunately, I won’t be able to be there as I will be on holiday in Devon but I hope the event is a success as I’d like to try and make an appearance if it is held again next year. 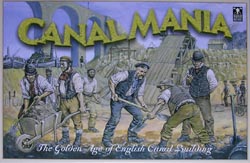 This week, we tried the new game by the Ragnar Brothers, Canal Mania. Unlike their previous games, this has been released with a professionally produced board and components, rather than the trademark tea towels. I think this is a good step and hope all their future designs follow this course.

Canal Mania is about the rise and fall of the British canal system in the 18th and 19th century, with players taking on contracts to build canals between certain towns and cities and shipping goods between them. A playerâ€™s turn is made up of three elements: Firstly, players can choose between accepting a new canal contract (if they are working on fewer than two contracts); enlisting the specialist help of one of the five famous engineers (which give advantages when building); or changing the build cards available in the second hase of the turn. Secondly, players can collect build cards or play cards to construct elements of the canals they are working on. Constructing canals follow a number of rules in terms of the maximum length of the canal and the combination of level stretches, locks, aqueducts and tunnels to be used. Completing a canal then brings a number of VPs according to the make-up of the canal (the more intricate the route, the more VPs are awarded, as beauty of the canal system is important to the client issuing the contract). Thirdly, the player gets to ship goods over the canal network for additional VPs, the further shipped the more VPs. Once someone reaches a given number of points, a couple more rounds are played, after which points are scored for incomplete canals, any remaining goods that can be shipped, and rewards for completing the most canal contracts. Most VPs then wins.

There was a fair amount to think about in this game, particularly trying to put a value on the available contracts and how they might mix with contracts you had already acquired. There was some luck in the cards that became available to take on your turn and Nige suffered a bit in not being able to get decent cards for his Leeds-Liverpool contract and it remained uncompleted throughout the game. I tried to ship goods as often as I could and managed to get a decent four town route through Manchester, which built the points up fairly regularly. Mark G managed to establish a good circular route in the South Midlands but didnâ€™t get the chance to ship as often as he would like due to competition for goods with Mark K. Steve and I had a bit of a spat in the North East, with Steve cutting me off from Goole costing me a couple of cards to my annoyance. However, I managed to get my own back by shipping a good on his Sheffield-Goole canal onwards to Manchester via Leeds and Huddersfield for unexpected points to me. The final scoring was close as Mark K ate significantly into my lead as most prolific builder but I just managed to hold on.

Canal Mania was a good game, although it took a while to determine any semblance of strategy. Next time will be better as weâ€™ll have a clearer idea of what weâ€™re trying to achieve but I enjoyed the game enough to make sure itâ€™s one we play again soon. Nige was less complimentary but he may have been influenced by poor cards, which cut him out of challenging for the win a bit too early. It did take a while to complete but, hopefully, we should get it down to under 2 hours with more familiarity.