It’s too long since I last played Pandemic so I decided to try out a solo game playing two characters. I randomly drew the Scientist and the Operations Expert, which seemed like a good combination. And sure enough, using the Scientist’s ability to discover a cure with four cards of the same colour (rather than five), we soon cured the yellow disease and the black one. The spread of black was fairly well contained so we managed to eradicate it completely, which was quite a good move. Having also, by that time, cured the red disease, it was looking really good for us. 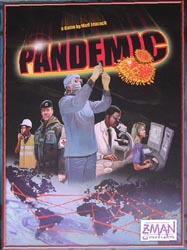 I decided that now was the time to ignore they spread of the yellow disease and go all out for that final cure. We’d only suffered four outbreaks up to that time so it seemed like an easy ride to victory and sure enough, my Scientist collected the four blue cards necessary and the Operations Expert joined him in London and built a research station ready for the cure to be discovered on the next turn. However, disaster struck, an outbreak of the yellow disease in Lagos triggered a chain reaction of three further outbreaks and the world was doomed. So close and yet so far but an excellent tense finish. I really, really like Pandemic and have upped my rating to a 9. We need to get it played again on a club night.

Four new games arrived on Christmas Day: Paris Connection was a gift from my Mum and Dad; Santiago de Cuba was from Jan; while my Boardgamegeek Secret Santa surprised me with two games – Ascension: Chronicle of the Godslayer and Barons. Good stuff. 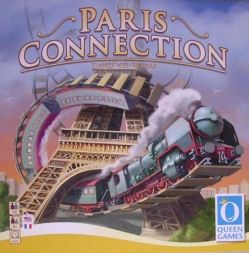 We’ve already tried Paris Connection and Ascension both of which were very good. We also got to play Top & Down (which was a bit trickier than expected forÂ one of Schmidt’sÂ Easyplay line of games) and Braggart (which was really good take-that fun).