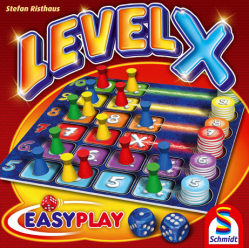 The Easy Play line of games from Schmidt Spiele is becoming a great series of short, light family games and I’ve yet to find a dud in the ones I’ve tried. Big Points, Los Banditos, Burgen Land and Finito are all really fun and now the latest addition, Level X by Stefan Risthaus, keeps that good run going.

If I were to draw a parallel, it would be with the old Sid Sackson game, Choice, which is great both as a solitaire or multi-player solitaire game. Level X adds a bit more interaction and competition to the mix. A player on his turn rolls four dice and then combines these to make one or more groups that total between 5 and 10 pips. The board shows for each number aÂ series of spaces at the end of which is an X space. So if you group the dice to make a 5 and a 7, you move your marker one space along each of the 5 and 7 paths. Some turns later, if you move a marker onto the X space, you knock any marker occupying that space off and gain a VP token. On subsequent turns, if your marker is still there and you choose to group your dice to make that number again, you continue to gain VP tokens every time you score that number – a big incentive for your opponents to race down that path and knock you off. Each number has a limitedÂ supply of VP tokens and when three sets of the tokens has gone the game ends. There are also 4 bonus tiles that can be gained if you collect a set of VP tokens for each number 5-10 and these can prove critical if you manage to grab one, although everyone elseÂ is likely toÂ try to freeze you out of at least one number to prevent that happening. The whole thing is wrapped up in 20-30 minutes.

Jan, Chris and I tried it for the first time yesterday and enjoyed it a lot. The game came down to which of Chris and I could gain the last 9 VP token. Chris needed it to stop me getting a 15 point bonus tile but was unlucky to roll numbers that didn’t add up to 9. Next turn, I did and was able to empty the 9 VP token pile, making three piles empty, and claiming the bonus tile. I won by 15 points. Good stuff.

The new issue of Spielbox arrived at the end of last week and is again filled with good stuff, although the English remains a little quirky.

This time, there are several pages devoted to the Nurnberg releases as well as numerous well written reviews of Egizia, Seeland, Ad Astra, Havana, Dungeon Lords and others.

In addition, there is another Dominion player board insert and tiles and rules for an expansion to the fruit collecting game, Finca.

Further details and subscription details can be found here. 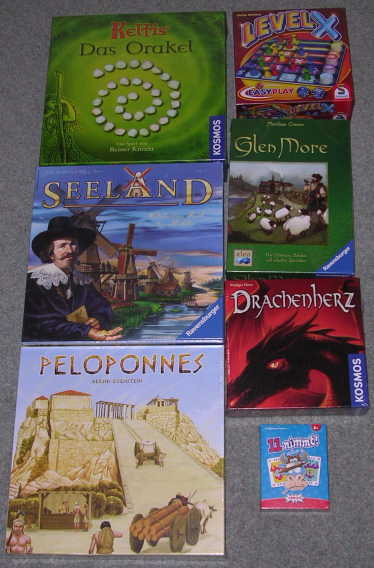 I’ve resisted ordering anything from Germany for quite a while now but, having just sold a bunch of games, I decided I could afford to put in a small order of new titles. That said, it does push my unplayed games total back up from 65 to 71.

Anyway, the order arrived today courtest of 12spiel.de and you can see what I received from the picture to the left. I am particularly looking forward to the new Alea release, Glen More, and Wolfgang Kramer’s 11 Nimmt – although this latest game only takes up to 7 players, as opposed to the 10 players that 6 Nimmt can accommodate.

Just a reminder thatÂ my latest batch of games for sale on Ebay will finish on Thursday. Take a look here for some good bargains, such as Antler Island, Alexandros, Strozzi, Wasabi and Kanaloa.

I’ve put another batch of 11 games up for sale on Ebay:

The auction ends on Thursday 20th May. 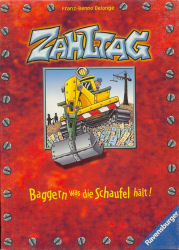 Last night, Jan and I had an enjoyable game of Zahltag, a 30 minute card game about fulfilling building contracts, designed by Franz-Benno Delonge and released by Ravensburger.

Players employ up to 10 in total of four different types of workers, whom they are hoping to utilise on building contracts. Each turn, a card is turned over from theÂ contracts deck and normally it reveals a building contract that requires a specific combination of workers to fulfil the job. Players then examine their hand of worker cards and secretly bid how much they require to be paid to complete the job. The lowest bid gets the job, receives immediate payment,Â and sets aside the workers needed for that job. These are then tied up until the start of your second subsequent turn, meaning your ability to meet the requirements of contracts arising in the meantime is more limited. Working out when only you are able to fulfil the worker requirements is key here as then you can demand the maximum Eu 8m payout. Mixed into the contract deck are six payday cards, at which point all those players with more unemployed workers than the person with fewest unemployed need to pay Eu 1m per excess worker. Once the fifth payday card is revealed and dealt with, whoever has the most money wins.

The game plays pretty well with two and turns move along very quickly. I suspect the game would play better with three or four players as the bidding would be that bit more competitive. As it was, Jan surprised me by accumulating more cash than me by game-end,Â as I had thought I’d been a bit ahead of her most of the way through. However, we both enjoyed the game and both rated it a 7.

There’s a new UK blog / podcast about boardgames called The Little Metal Dog Show, although thankfully it seems to be about games other than Monopoly so far. Michael Fox is the blog’s creator and is an enthusiastic writer. So far it looks pretty good, although I’ve not listened to the first podcast yet. The article on Matt Leacock’s upcoming Forbidden Island was particularly interesting. The site is here.

18 games up for sale and, with only 2 days left to bid and very few bidders, this could be the time to grab a bargain. Fancy Sid Sackson’s BuyWord? Or Stefan Dorra’s Salamanca? Or Dirk Henn’s Gardens of the Alhambra? Take a look here.

Martin Wallace’s Treefrog Games (formerly Warfrog) has a brand new website. On it, there are details of Martin’s next three games, although the release date for A Few Acres of Snow shown on the games listing page is a year out (But then it wouldn’t be Martin without the odd printing error, would it?)

Age of Industry is theÂ first release in June – at UK Games Expo – and the rules are online here. It is a streamlined version of Brass that supposedly plays in 90 minutes. The next game is London to be released in October and finally the aforementioned A Few Acres of Snow in March 2011. 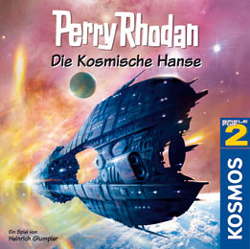 A better month this time for reducing the unplayed list, helped to a degree by some Ebay sales. Anyway, duringÂ April this happened:

This month is Beer & Pretzels, which gives me another opportunity to get a few games off the list. Let’s see how far below 60 we can get by month end.