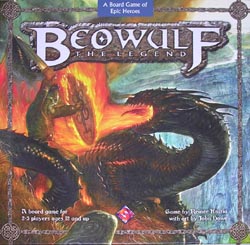 John had not had the chance to play this yet, so as there were five of us and those that had played before were keen to give it another go, we set out on the epic voyage. This time, Mark K and Nige were very wary of getting wounded as this had been their downfall last time. Nige got off to a good start but Mark K had luck against him on a couple of early risks. I managed to grab the special card that allows you to decline any wound and I held onto this to protect against the deadly double wound at the end. As we approached the end of the game, Nige had amassed a fair number of fame points but was left unable to compete much in the critical last few episodes. Mark K recovered from his early misfortunes and scored steadily, especially in the treasure episodes. However, this left me with most treasure and most symbols at the end to collect a vital 12 fame points.

The final count revealed Mark K and me tied with 25 points, a joint win made all the more satisfying by NIge lagging behind by just one point. John’s rating was equally high as we had decided last time and I’m still finding there plenty to enjoy in the game. Good stuff. 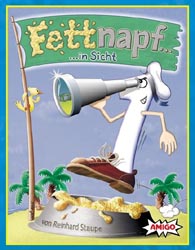 We finished off with this nice light memory cardgame, designed by Reinhard Staupe and published by Amigo. There are two types of card: number cards and island cards. Everyone starts with 1 island card and a hand of 3 number cards. Each turn, a player plays a number card, announces the current total of that card added to the last player’s total, and draws a replacement number card. If the total goes above 30, subsequent cards are deducted from the total until it falls below 10, at which point cards are added again. The player to the right of the one whose declared total breaches the 30 or 10 limit gets rewarded with an extra island card. If the declared total ever matches the number of an island card held by another player, the declaring player gets a penalty Fettnapf card. Once one player has gathered 4 Fettnapf cards, whoever has the fewest number of penalties wins.

This is a very simple game but there are some tense moments when you’ve forgotten which island cards have already been declared. Mark G had everyone in stitches when, after I had just picked up a Fettnapf card, he immediately played a Zero card, declared the same total and after the briefest pause said “Ah, I don’t think I meant to do that.” We weren’t surprised after that when he became the first to collect a 4th penalty. We were surprised that Nige was demonstrating the mental capacity (some might say, luck) not to pick up a single penalty and claim the win. Nice quick game which we all pretty much enjoyed. 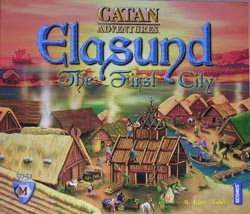