August saw quite a bit of gaming and I managed to play 47 games of 39 different titles, with 5 of them being new to me. The new games, which were all Reiner Knizia games, were:

Knizia does Carcassonne: Forbidden City is a tile-laying game where you try to close off areas where you have the most presence. But the twist is that the area also scores for linked adjacent areas. Solid game where spotting and playing for the linked areas is the key to the game.

Knizia does Poison again. Rather than 13, the trouble number is 7, and taking the pot to that number or more gets you a penalty, with the chance to get rid of penalties if you don’t take any at the end of each round. Scratches the same itch and plays pretty well. We really enjoyed our four player game.

Knizia does Midnight Party with a dragon taking the place of Hugo. Simple game but the passage layout with traps, deviously placed, treasures available to tempt you and secretly backing certain heroes makes this a very fun game.

Knizia does Frank’s Zoo (I know there’s a better analogy but I’m struggling to remember). Play one or more cards of the same animal to the table. If there are three or more of that animal in play, it scares off the next highest valued creatures and they score points but, of course, the mouse still scares off the elephant. A nice light hand management game.

Knizia does Patchwork: Gangsters from 7 gangster families are placed in a circle; the cop figure moves and arrests a gangster or takes a bribe. Taking a head of family puts him in jail and means the rest of the family will score points. Once five heads are in jail, the other two are declared innocent and any arrests of that family deduct from your points but bribes taken for the “innocent” family get paid out by the free crimelord. Good game that has a bit of group-think attached to it in terms of how quickly the family heads get carted off to jail.

Lots of solo games this month, with the newly released Patchwork Automa working really well. A welcome return to the table for Peloponnes, Monster Box 1 from Hogwarts Battle (3 player – lost again), Star Realms and Legendary, which I can’t believe I’ve not played since December 2015. Also, a few “ancient” titles got an outing this month, such as Honeybears, Maestro and a good seven player game of Koalition.

I added 6 new titles to the collection: Drachenhort, Kariba, Kartel, Ghosts, Blue Lagoon and Donkey Derby. I also reacquired four games and parted company with one, which means my total collection now stands at 592.

My list of unplayed games is up from 4 to 5 and, although there was nothing new that rated above a 7, my Game of the Month deservedly went to Drachenhort. 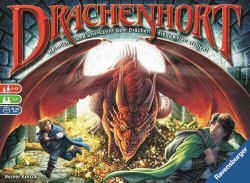