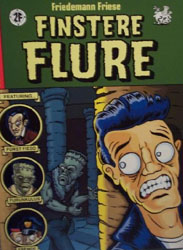 We started off this week with a game of Finstere Flure (Fearsome Floors). In the past, this has been a game where the monster has caused quite a bit of havoc and that is what has generated most of the fun. On this occasion, he wandered around aimlessly and although he messed with a few of the adventurers, these were back markers. Meantime, everyone was racing for the exit to try and get their guys through before the monster got diverted through a wall to appear by the exit. However, it never happened: maybe everyone felt they were in with a good shout of getting there first but the monster never went through a wall at all. I managed to set myself up for the win while simultaneously blocking Phil from doing the same and it ended up being very much an anti-climax. A bit disappointing really apart from me claiming the win and ending Steveâ€™s winning streak (after he won all 3 games a fortnight ago).Â 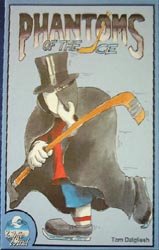 We then moved onto an old favourite. Phantoms of the Ice is a game Iâ€™ve played a lot and it is always terrific fun. Steve and Phil hadnâ€™t played before but itâ€™s so easy to pick up and we were soon constructing our unstoppable teams. Well, some of us were creating unstoppable teams: I seemed to trade bad for worse and John must have been doing the same, as he never challenged anyone to a match the entire game. The nice thing about the game is that the strong teams donâ€™t stay strong for long as everyone wants to trade their dross for your superstars. Phil started with a dismal team and lost three quick matches but then managed to get a decent team and grab 3 wins later on. Mark K and Nige ended up in the final with Nigeâ€™s team looking the stronger on paper. Luck was with Mark though as he scraped a draw in regulation time and took the title in the sudden-death play-off.