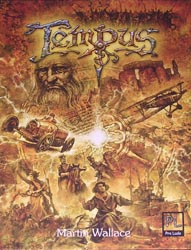 The first session of 2007 saw us giving a first try to Tempus, Martin Wallaceâ€™s Civilisation-like game. The game is played over ten rounds (or eras) and in each round players get a certain number of actions according to how far their civilisation has progressed. At the start, you only get 3 but by the end this has risen to 6. Choices of action are between moving, having babies, fighting, having an idea and building a city. The ultimate aim is to spread out to as many parts of the island as you can and build cities, as these are the way you get victory points. Each non-mountain location you occupy is worth 1 VP and each city you have is worth between 2 and 4 VPs. The only other way of getting VPs is by developing the flight ability in the last round, which yields 3 VPs.

The game is intriguing and does a good job of building in intensity. At the start, you donâ€™t get to do much but as you develop, you gain more flexibility and new innovations allow you to do other things. At the end of each round, the player who has made the most progress gets to move to the next level of development and this gives an advantage over everyone else for the next round. However, the advantage only lasts for one round as everyone catches up with the leader at the end of the round and before working out who progresses further. This is an elegant mechanism and ensures people donâ€™t fall too far behind. The multiple use of the idea cards is also nice and gives a fair bit to think about in whether to use cards for their ability or to do battle or to try and win the progress advantage at the end of the round. All in all, a very good game and one we all enjoyed very much.

That said, we all agreed that we needed another game to really get to grips with it. The rules are pretty simple but the impact of some of them eluded us until too late. Nige and I made big mistakes in the placement of our first cities. Fighting was kept to a minimum as it seemed expensive but the advantages at the end are a bit more critical than I first thought. We did have one big battle against one of my 3VP cities. Mark G decided to try his luck and I picked the hill terrain for idea cards. This was the only terrain that did Mark any good and we thought he had won the battle much to the amusement of Nige until I realised, as we were removing my city, that I had miscounted my defence value and weâ€™d actually tied (and ties fall in the defenderâ€™s favour). A sigh of relief from me. The end was extremely tight between Nige, Phil and me, but a last minute religious conversion of one of my followers by Nige proved critical and gave him the win by just a single point. Excellent stuff and this sets the bar pretty high for the rest of the year.