In March, I managed to play 55 games of 34 different titles with 4 of them being new to me.

I’ve hesitated over Obsession for quite a while but eventually succumbed and realised I shouldn’t have worried as the game is superb. It really is all those Victorian novels about the Derbyshire estates wrapped up into a very engaging game and the solo version is very well thought out. I’ll probably grab the Upstairs Downstairs expansion when it’s restocked in the UK in the Summer as it really is that good.

Printed out a copy of the free Carniball table for this pinball dice roll and write game designed by Geoff Engelstein. It does give a good feel for pinball and there are definite choices to be made, which can work for or against you. The only thing against it is that it takes a bit too long to play. A single ball can run for 15 minutes so a full game is about 45 minutes. Pinball for me should be fast … or is that just because I keep striking out so quickly when I play the real thing.

This swaps the real-time discovery of the original game for a more considered dice management game. It works fine but had me hankering after a play of the original (which I did a couple of times later in the month),

This is a slightly more complex version of UNO but I’m not sure the additions, which add to the time taken to complete a hand, do enough to make me pick this over regular UNO.

Playing a few sports-themed games this month. Pocket Football not quite hitting the mark made me dig out Fastcard Soccer which is a brilliant highlights replay syatem and I decided to run a league using Melchester Rovers and other teams mentioned in the Roy of the Rovers – Tiger comic strip. Also with the F1 season starting, plays of Go 500 and Formula D on the Bahrain circuit seemed appropriate. Marvel United got another play once the Kickstarter stretch reward box arrived this month and there are going to be plenty more plays as the game is really fun. And the Escape R&W made me dig out Escape: Curse of the Temple to get me rushing around for 10 minutes at a time grabbing gems before the temple collapsed on me.

I added 5 new titles to the collection which were Solo, K2, Escape: Roll & Write, Obsession and Agents of SMERSH. I also reacquired 2 games and parted company with 1 game so my total collection now stands at 688.

At the end of March, I have one unplayed game (0 at the start of the month) and my Game of the Month was an easy choice in Obsession. 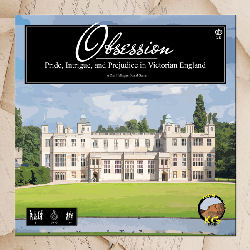