In February, I managed to play 60 games of 40 different titles with 10 of them being new to me.

This is a neat co-operative programming puzzle game somewhat akin to Robo Rally where the players build a row of movement cards without communicating what cards each has played to manoeuvre the robot around a grid to complete a given objective within a set number of rounds. It works really well and it’s fun seeing your programming going to shambles and then having to recover. Good stuff.

This is a clever solitaire print and play game from Mark Tuck (the designer of Orchard: A 9 card solitaire game) where you are competing in a snooker tournament against progressively harder AI opponents. Has a nice feel of building a break and is challenging even with the weakest AI.

Roll the dice to try to catch a wave and ride it to gain points with five attempts to score the most points from your three best runs. Has a nice feel of surfing and as the tour progresses you can pick up sponsors to improve your chances of scoring big points. Good fun.

Very light dice game depicting the highlights of a football match. Little in the way of decision-making (as is the case with most of the Pocket Sports range) but gives a good feel for the game.

Not truly “The Dice Game” as it is both dice and cards but involves a bit more push your luck than the original card game. Not as good but still works reasonably well and we enjoyed it.

This is Zombie Dice re-themed to the Batman universe where players act as different villains who can each manipulate the dice in a different way. You’re still trying to roll the most brains (sorry, loot) and avoid the shotguns (Batman symbols). A nice variant that I’d like to pick up although it’s difficult to find these days.

Another decent dice version of a sport where you face off to gain control of the puck and pass around and shoot, attempting to outscore your opponent, while making the most of your power plays.

This attempt to reflect a cycling tour has some interesting ideas but I didn’t find it quite worked for me. You’re trying to progress up the “classification” over the successive stages but often you’re simply swapping places with the other teams and not really getting very far at all. Need to try again but not my favourite in this line

The boxing dice game works ok and does a decent job of the boxers wearing their opponent down. Cause enough hits in an exchange and you can knock them to the canvas with the chance that they might not beat the count. Pretty good.

I thought this sounded like a good idea, competing to come up with the best word from the same rack of letters but the execution, with dry wipe boards that don’t really dry wipe because of the pens, didn’t work for me and this will probably be offloaded to the charity shop as soon as they reopen.

My annual play of Pizza box Football was fun as always (and I called the Superbowl winner again) and I also got in my first play of Football Highlights 2052 in a while. I also tried a couple of solo modes for High Society and Zombie Dice that are being submitted to a BGG contest and they both worked pretty well.

At the end of February, I still have no unplayed games (0 at the start of the month) and my Game of the Month was Quirky Circuits 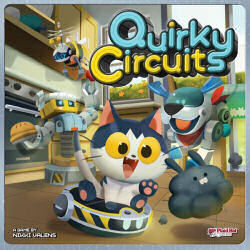