In April, I managed to play 77 games of 30 different titles with 5 of them being new to me.

A nice puzzle game about collecting resources to build buildings in a tiny 4×4 grid representing your town. Each building type scores points in a variety of ways, randomly selected at the start of the game. Clever as your building positioning can drastically limit your freedom to construct new buildings later in the game.

This came included as part of the Whale Riders board game kickstarter campaign and is a re-implementation of Trendy. Pretty much identical although, as a variant, there are some extra port cards that add further rules for when a scoring is triggered.

Print and play version of what turned into the commercial game but I think this plays pretty much the same. In this small dice game, you man a tank and are trying to destroy enemy tanks before they destroy you. Plays very quickly and is quite challenging. I liked it quite a bit.

Another in the Pocket Sports range of dice games, this time it was Basketball. As with the others, there is not much decision making but it gives a decent feel for the end to end nature of the sport and I liked the hot streak mechanism which gives a persistent advantage to a team until they next miss a basket.

Tried the demo version of the game which is available online. This is a deduction game where you are searching for visual clues on a large picture depicting Crime City, trying to solve various aspects of a crime that has been committed. Quite novel in game-play terms but it didn’t strike me as something I’d be itching to play multiple cases.

Sports games were the focus of the month particularly with Fastcard Soccer, Flamme Rouge, Pocket Tennis, Harry’s Grand Slam Baseball and Pocket Golf getting a number of plays. Marvel Champions and Marvel United continued to see play and it was nice to get Wyatt Earp and Dungeon Raiders back to the table after too long an absence.

I added 4 new titles to the collection which were Pocket Sports Basketball, Tiny Towns, Whale Riders and Whale Riders: The Card Game. I also reacquired 1 game so my total collection now stands at 693.

At the end of April, I have two unplayed games (1 at the start of the month) and my Game of the Month was Tiny Towns. 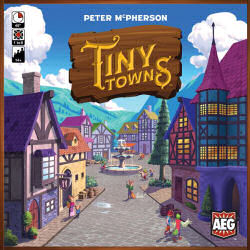