Jan and I have just returned from a week’s holiday in Tenerife where we had brilliant weather, a nice hotel offering plenty of activities – Archery, French Boules and others. Two wins at the French Boules – archery is clearly a game of millimetres and I was millimetres the wrong side of the line every time.

Managed to smuggle several games over to the Canaries and back again thankfully, as I got stopped at Customs on the way out as their scanner was showing a large amount of organic matter. Not sure why as I’d only taken LOTR: TCG, Ra: The Dice Game, Cafe International: TCG, Gloria Picktoria, Coloretto, MR: Jack the Ripper, Dominion, Mijnlieff, Archaeology:TCG, Stich Meister, Gold and Keltis: TCG. 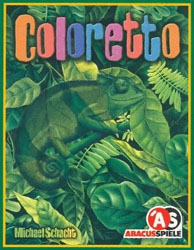 Got to play five of them including two four-player games of Coloretto with my Dad and Jan’s stepdad. Even though it took them a while to grasp the rules, Geoffrey (stepdad-in-law) won the first and Rod (Dad) won the second. The good thing was that, after the first game, they both wanted to have another game straight away.