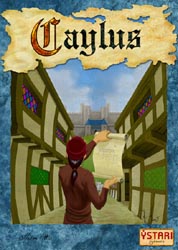 Caylus was the game of choice for the 5 of us, having decided to play a longer meatier game. Me, Will, Mark, Paul and Dave all set off on different strategies. Dave was the castle builder and favour getter, he set about improving his position on the favours track getting extra VP’s. Mark also made progress on the building track but his was the building option. I decided to get some early wooden building in, including the mason with the hope that the others would give me VP’s by using my buildings. Paul had a similar plan and we both went for money on the favours track with perhaps a long term view to buying our way to victory. Will went in completely the opposite direction and decided money wasn’t a problem, he went for extra resources on the favours track; he was to find out later (along with the rest of us) that money or the lack of it can be a big problem.

The wooden buildings and then the stone buildings were shooting up so fast that even the seemingly jet propelled provost couldn’t keep pace and the Bailiff found itself well behind the lead buildings. The speed of the Bailiff did however cause a minor panic at the end of each phase of castle development with players having to scramble workers and materials together to get a presence in the castle or suffer the VP penalty. On one such occasion Will did get a worker into the castle but due to forgetting to move the provost to a resource building another of his workers was on, wasn’t able to acquire the necessary cubes to build a part of the castle. He therefore lost VP’s for not building that go and for not having a presence at the end of the phase.

That’s the danger in Caylus, it’s about remembering the activation sequence and although you have fixed in your mind that you’ve got the resources from worker placement, you’ve got to remember the other important things like having the resources at the right time or remembering to move the provost to activate them. Later in the game a player (who may or may not have been Will, but whose name rhymes with Bill) wanted to build a prestige building, one worker was placed on the architect and the other on the alchemist to get the necessary gold, but the architect activated before the alchemist and therefore no gold. It’s a mistake that can easily catch you out because in your mind you already have that gold.

Will’s money (or lack of it) problem manifested itself later in the game and he found himself only being able to activate 3 workers each turn for a number of turns, this of course had the knock on effect of making worker placement more expensive for the rest of us after the first 3 had been placed. No one seemed able (or willing) to afford to place all of their workers. Using your own buildings (which always cost 1 to use) became very popular.

In the final stages Mark had worked himself into a good position and was able to buy the Cathedral (25VP’s), this placed him a good 10pts clear of the rest of us. He then attempted to get the game finished quickly and would have done so had he remembered to send a worker to move the provost. He had the opportunity but I took advantage of his slip to move the provost back 3 spaces and that took the game into a final turn. This gave us back markers a last chance to catch Mark who did have one more card up his sleeve and was able to get a gold resource cube which he used to buy the statue with it’s 7VP’s and one favour (used to get another VP of course). Dave practically finished building the castle single handed and with the favours flooding in he was now getting 5VP’s per favour, he almost caught Mark but finished just 2 points behind.

A well worked win for Mark and only 7 points from first to fourth with Will trailing slightly further back. This is one of our favourite games and will no doubt see a early return to the table.