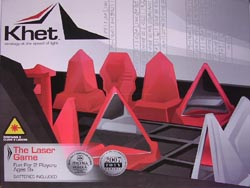 Just over a week ago, I got an e-mail from Eric Martin ( the editor of Boardgamenews) to let me know I’d won a copy of the Khet prize pack in the most recent BGN Game Giveaway. A week later and a box fromÂ Kentucky arrives on the doorstep and I’m now the proud owner of Khet: The Laser Game. The pack includes the main Khet game,Â a beamsplitter expansion and a Khet T-shirt.

The game itself looks pretty interesting where you manoeuvre your pieces so that when you fire your laser, the beam bounces off the mirrored surfaces on certain pieces until it hits something solid. If it’s a wall, your opponent gets a go. If it’s another piece, it gets removed from play and if you hit the opponent’s pharaoh (the king), you win. I’ll let you know what it’s like when I get to play it for real, rather than just fiddling with the lasers.