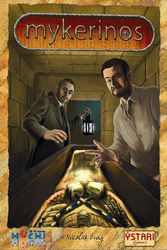 Second week with just four of us, so it was a good opportunity to try out Mykerinos, which is being released in the UK this week. Being published by Caylus publishers, Ystari, I was very interested to see how this one played. Although much shorter and simpler than Caylus, I think Mykerinos is another very good game from Ystari. It was designed by Nicolas Oury, a name Iâ€™ve not heard of before.

The game is about archaeologists exploring the sands of Egypt, trying to find treasures to display in the most prestigious places in a museum. The museum has five wings, each looked after by a different patron, and by reserving the best spots for treasures that a particular patron is interested in, you get rewarded more for each exhibit of that kind you acquire by the end of the game.

The game play is pretty simple but has some agonising decisions to make. Each of the four rounds begins with a number of areas being revealed for exploration. Next comes the main part of the game, excavating. On a playerâ€™s turn, he can can do one of three things or drop out of the round: place a marker on any one of the available plots in the areas to start an excavation; place two markers to extend an existing excavation; or use the help of a patron for whom he has already secured an exhibit (not possible in the first round). The aim is to have sufficient markers in an area to get some payback for your investment (guaranteed for the two highest investors but may be some pickings left over for others). Markers are very limited and it could well be a good tactic to drop out early to keep back markers for a subsequent round. Once everyoneâ€™s placed all the markers they want, each area is tallied and the person with the most markers has a choice of taking one of the two exhibits in the area (some of which also give extra VPs) or reserving a spot in the museum. (The first spot in each wing pays triple for each exhibit of the right type, a second reserved spot will pay 5 times the value.) After four rounds, each exhibit players have acquired is valued according to the spots you have reserved in the museum. Each set of five different exhibits also gains 5 VPs. The total is added to VPs already won during play and, whoever has the most VPs wins.

Mykerinos is quite an elegant design with a fair bit to think about. Itâ€™s easy to get stuffed by coming third in a region (as I can testify) as early in the game the 2 higher scorers will tend to take the exhibits, but in the later rounds, players are likely to balance more between taking exhibits and reserving museum spotsâ€¦ And itâ€™s amazing how critical the marker needed to reserve your place in the museum can beâ€¦ And the last round can be absolutely critical, when more areas are being excavated (six as opposed to four in the first three rounds). In our game, I had the 5x museum spot taken from under my nose twice, which meant I wasnâ€™t going to be in contention. Mark K however worked the last round perfectly to enable him to complete two sets of exhibits. This, together, with scoring well for his 5x museum spot allowed him to grab a well played win. Play time was just over an hour, which felt fine for the weight of the game. We all really enjoyed Mykerinos and I would like to try it again soon to eliminate the bonehead mistakes I made this time. Good stuff again from Ystari, all three of whose games Iâ€™ve enjoyed a lot. 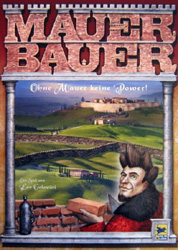 Mauer Bauer is a new game by Leo Colivini and published by Hans im Gluck. It is a game about building walls, towers and buildings to create towns in such a way that you satisfy the conditions laid down on your hand of building project cards. These might, for instance, give you 2Vps for every white tower in the finished town or 1VP for each blue building not inside a completed town.Â

Gameplay is pretty simple but there is usually a bit to think about on every turn. First you have to lay a piece of wall anywhere on the board. Then you place towers at each end of the wall and buildings either side of the wall. You roll some dice to indicate what colour tower and buildings have to be placed. If your wall and others previously placed completely enclose an area, a town is formed and scoring occurs. Each player has the option of declaring one or two of their building projects and scores points according to how well they have matched the cardâ€™s conditions. You then get to draw one new project (even if youâ€™ve declared two, in which case your hand is reduced for the future). Instead of scoring, you can, however, discard a card and then get to draw 2 new projects. The game ends as soon as the supply of one of walls, towers or buildings is exhausted. Whoever has the most points wins.

The game played quite well but points are very much determined by having the right building projects at the right time. Mark K and I both suffered early on by not having decent cards and, although the person in last place has the option to swap any number of cards in their hand after a scoring, we felt we were always playing catch-up. Of course, it may have been that Mark G and Phil had planned the development of the board better to suit their cards but they consistently seemed to have good-scoring projects to declare. I also suffered through having two black tower projects in a game where nobody seemed to be rolling black towers on the dice. We also thought the game lasted a bit too long at nearly ninety minutes. Maybe we were taking too long in deciding our moves but I donâ€™t think so. Consequently, our ratings were a bit lower than I had expected them to be, as the game seems to have been fairly well received. Maybe our game was a bit of a fluke so Iâ€™d like to try the game again. Anyway, Mark G did enough to take a decent lead going into the last few turns and was able to limit the final scoring by closing off a one-space area with the final wall to claim the win.