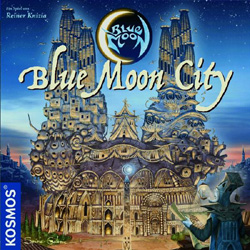 This week, we met at Mark Kâ€™s house and, as Iâ€™d just received a new order from Germany, I was itching to play a couple of these. With just four of us, I decided we had to get in a game of Blue Moon City, the new Reiner Knizia game from Kosmos. The game is a boardgame cousin of the Blue Moon card game. It uses the same eight races but knowledge of the card game isnâ€™t necessary to enjoy the boardgame. Nige insisted he wanted to play the Mimix and was a bit disappointed when I told him he couldnâ€™t as all players use all the different races.

The theme of the game is about using the services of the different alien races to build the various exotic buildings that make up Blue Moon City. Each building has between 1 and 3 sections that need to be built before it is considered complete. Each section shows a number indicating the colour and value of cards that need to be played to build it. Players use cards from their hand to complete sections of a building and, once all the sections are complete, those who have taken part in building it are rewarded with a combination of dragon scales, cards and crystals, the last of which can be traded in to build a section of the obelisk in the central market place. And pieces of the obelisk are what matter at the end of the day, as the winner is the first person to build a certain number of pieces of the obelisk (4 in a four player game; 7 in a two-player game). Dragon scales yield additional crystals once the supply of scales is exhausted so can be a big benefit if you get enough of them.

I really enjoyed Blue Moon City. The clever part is that once buildings are complete, they add an additional reward to those that help complete an adjacent building. This ensures players compete in the same areas rather than go off and build by themselves in a corner. The semi-random set-up means you need to try and gauge where the critical buildings and the adjacent buildings are and, in our game, Nige took best advantage. I tried to use the dragon scales to gain crystals but it didnâ€™t work out as well as Iâ€™d hoped and Nige cruised to a fairly easy victory.

The other thing to say is that the game played really fast, which is unusual for our group. We finished within an hour, including rule explanation. I think Blue Moon City is a very nice game of optimising cards in your hand to best advantage. We wondered if the fourth player (me in our game) was at a significant disadvantage, as the earlier players were able to get a foothold in the most lucrative buildings, but I think there are enough decent places to start and you just need to adapt to how people have played before you. Anyway, very good game with a fair bit of replay value due to the random set-up of buildings. One to play again soon. 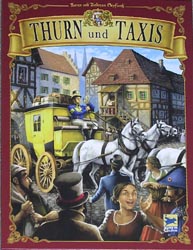 Next up was Thurn und Taxis, designed by Karen and Andreas Seyfarth and published by Hans im Gluck. The game is about building the German postal network and players are trying to establish postal routes to connect cities in the various regions.

The gameplay is pretty simple. On a playerâ€™s turn, he draws a card from a choice of six open cards and adds it to his hand. Each card shows one of the various cities through which the routes will travel. He then must play a card to start or extend a postal route that he chooses to work on. Each city card played must be connected to a city card already played for that route. If you cannot play a card to extend your current route, you have to discard that current route and start a new one â€“ not nice. Once youâ€™ve played a card, you can then choose to finalise the route youâ€™re working on, in which case you place markers in certain of the cities used for that route. The more city markers you place the better, as each marker not on the board at the end of the game is deducted from your score. However, you score positive points by building progressively longer routes. You first 3 city route will give you a 3 coach card; each subsequent longer route gives you a better coach card with the 7 coach card being the best, the attainment of which triggers the end of the game. You also gain points by claiming bonus tiles as you place your routes. These are awarded for building longer routes, for having branches in all the cities in a region, and for building at least one city in all regions outside Baiern.

The game feels fairly similar to Ticket To Ride but, in Thurn und Taxis, you have another aspect to think about because each turn you can call on the assistance of one of the four postal officers waiting to help. Each gives a different benefit: one allows you to draw two cards rather than one; one allows you to play two cards instead of one; the third allows you to ditch all six cards available to be drawn and replace them with six new ones; and the final one allows you to upgrade to the next coach card if you are up to two cities short when you build a route (e.g. take the 6 coach card if you play a route connecting only 4 or 5 cities).

This was another game we enjoyed quite a bit. It took a bit longer to play than Blue Moon City but you had a bit more control over the cards you drew so were able to plan better. We all made a fair bit of use of the postal officer that cleared the choice of draw cards. Towards the end of the game, I worked out a very good final route that would allow me to take a 7 coach card and also gain me three bonus tiles, while triggering the end of the game. Although Mark G and Nige were also able to gain their 7 coach cards on the same turn, the bonus tiles gave me enough to ease past Mark G who, up until then had looked in a pretty strong position. Iâ€™m not sure how well it will stand up to repeated play but Thurn und Taxis is avery accessible game to get into (pretty much on a par with Ticket To Ride) and it could be a good tip for this yearâ€™s Spiel des Jahres.