I sold 45 games and added 7 new games to the collection which were Bang: The Dice Game, Khmer, Greedy Kingdoms, Famous Fairways, Famous Fastballs, Council of Verona and Age of Industry. The only game I played more than once this month was Shephy and that was only twice. My unplayed list has dropped from 32 to 30 and Game of the Month didn’t appear until the very last day of February when I played the absolutely fabulous Machi Koro. When this comes out in an English edition, it is going to be an instant purchase. 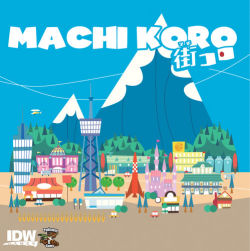