In November, I only managed 12 plays of 9 different titles, six of which were new to me. The new titles were Tzolk’in, Get Bit, Gauntlet of Fools, Merchant of Venus (2nd Edition), Timeline: Inventions and Morels.

I only added two games to the collection, both brought back during my trip to Toronto, and my unplayed games list is only down to 26. There was no outstanding game I played this month but the one that gets my vote for Game of the Month for November is Morels, a two-player set-collection card game which I can see playing several times as it’s in the same mould as Jaipur. 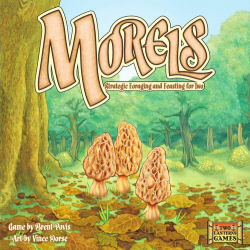