I picked up A Fistful of Penguins at the weekend and got to play it last night with Jan, Bex and Chris. The game is a simple dice game made up of nine dice with different animals on each face of the die. You also get a stack of penguins that allow you to manipulate your turn. 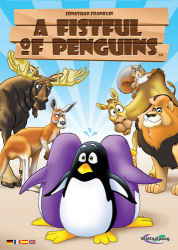 On your turn, you roll four,five or six dice (increasing in each of the three rounds) and you either stick with your result or spend penguins either to add dice or re-roll your existing dice. When you stick, you score for the animals you have displayed. Highest score after three rounds of play wins.

I’m not sure if there is just one optimum strategy – grab as many penguins as you can in the first two rounds and then use your multiple re-rolls to max out on kangaroos. I suggested this as an option to Chris and he executed it perfectly to run away with the victory (105 points with second place only getting 76). However, it was good fun and only took about twenty minutes to play.