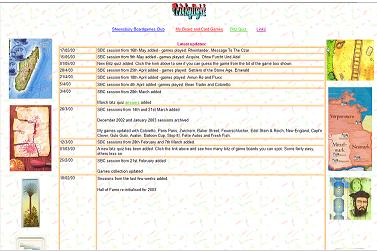 Now, the Shrewsbury Boardgames Club has been going a lot longer than ten years but thisÂ month marks the tenth anniversary of me moving back to Shrewsbury and diligently recording our escapades on the web. The earliest screen dump I could get from the Wayback Machine was from May 2003 but, if you look at our archive session reports, you’ll see the first was dated 20th July 2001 when Nige, Mark K, Ben Kipp, John Williams and I played Alan Moon’s Das Amulett and Capitol (actually, John watched Capitol as he needed to leave early).

So happy anniversary to us.