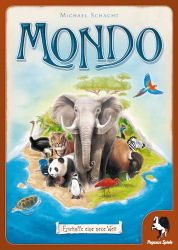 On Monday, the nominees for the top German game award, the Spiel des Jahres, are announced. But, in addition, there is going to be a new award, the Kennerspiel des Jahres or Enthusiasts’ Game of the Year, launched.

The Opinionated Gamers blog has been trying to predict which five games will be nominated in each category and their combined opinion is that the SdJ nominees will include 7 Wonders, Asara, Mondo, Mord im Arosa and Airlines Europe. The KdJ predictions are: Die Burgen von Burgund, Merkator, Navegador, Pantheon and Tikal II.

It’s quite difficult trying to work out where the threshold will lie between the two awards (assuming a game will not appear on both lists) but I think 7 Wonders might be thought of as falling into the second category, although it’s by no means a complicated game. So I came up with my own lists as follows.

Of course, the jury is well known for picking games out of left field so it’s anybody’s guess what will actually be chosen. I’ll post a follow-up after the nominees are announced.