The new release from Fragor Games this year will be Savannah Tails, an ostrich racing game. Here is a brief description from the web page:

“Play as either Albrecht, Alexandra, Enzo, Nnelg or Mathilda as you race for glory through the African savannah. However, winning the race is the least of your worries. Cheetahs will try to eat you. Crocodiles will try to eat you. Warthogs will probably try to ignore you. Elephants are just in the way. The less said about porcupines the better. 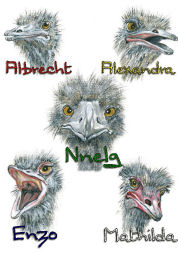 The game is for 2-5 adventurous flightless birds. It plays quickly and can be learned in minutes. Players have their own deck of ostrich cards from which they draw a hand of four â€“ these are used to move your ostrich along coloured ostrich footprints. You must end your turn on a footprint which matches the colour of the card you played. In addition, bonuses can be received at water holes. These include â€œWhacky Wings,â€ â€œBoinnngggâ€ and â€œNeckstretch.â€ Some are for one-time use while others allow a benefit for the rest of the game.

The game will include 25 track sections allowing players to once again design their own races. Some of these feature â€˜unhelpfulâ€™ animals. Special tracks involving a rope bridge, quicksand and a sand dune are also included.”

The game is being produced as a limited run of 1,000 copies and it will cost 23 Euros at Essen. A pre-order facility is available. More details can be found here.