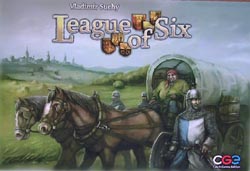 This week, we played League of Six, designed by Vladimir Suchy and published by Czech Games Edition. The game is about tax collecting in a 15th century European kingdom. Players aim to impress the king by being the most successful tax collector over six years (rounds).

Each round is played over a number of phases. Players take turns choosing towns at which to collect taxes. If an opponent wishes to choose the same town as you, a bidding process takes place, with the high bidder remaining in place and paying his bid to the loser, who has then to move to a different town. This bidding and moving process continues until each player stands in a separate town. After rearranging the player order based on the bidding results, players then take turns taxing the cities in which they stand. This can generate a variety of goods (to place in the royal or civic leadersâ€™ stores), guards (for bidding) or horses (to determine the player order for the last part of the round). Once everyone has levied taxes, the player with the most horses chooses one of eight rows in the royal or civic stores and starts to fill that row; each row depicts 2-5 goods in some combination of colors. Each good placed generates VPs and other players are obliged to fill the row if you canâ€™t complete it. If filled, the row gives the person choosing the row a bonus of VPs or civic leader votes. The row-filling process continues until all players have stored their goods. After six rounds, civic leader votes are tallied and generate bonus VPs and whoever then has the most VPs is declared the winner.

In our game, Mark G and Steve concentrated on getting VPs from the royal stores whereas the other three competed over the civic leaders. It turned out pretty close but with the civic leader points being split between three, this reduced the effectiveness of this. Mark G made a good choice of store pretty near the end to deny Steve some extra VPs and this proved decisive and gave Mark his first win of 2008.

We all thought League of Six was quite a clever game and the competition for towns was interesting. Horses appeared quite important to ensure you were able to place in the stores early and secure a decent row completion bonus. All in all, another good game from the Czechs. 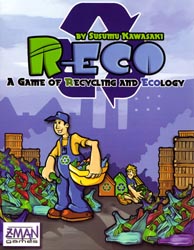 We finished of with R-Eco, a quick card game by Susumu Kawasaki and published by Z-Man Games. The game is about the virtues of recycling and the evils of dumping waste.

The cards represent four types of waste and each type has a disposal facility. On their turn, players get to add cards of one type to the corresponding disposal facility and if the total equals or exceeds four, these get removed and the player gets a reward. However, each facility also has a dump site and the player also has to take all the cards from the dump site into their hand. However, a player can only have a maximum of five cards in hand and any excess has to be illegally dumped (for negative points). More cards then get added to the dump site for future turns. Once all eight rewards from one of the dump sites has been claimed, the game ends and the rewards are counted, but they must have at least two reward counters of a particular waste type for them to count. Illegal dumping penalties are deducted and a bonus is given for someone who does not illegally dump at all. Most points wins.

This was a nice light filler, although some felt the choices to be obvious and turns were driven purely by what cards turned up in the dump sites. To me, there was some angst in getting your timing right and although the decisions were not too brain taxing, weighing up whether or not to illegally dump to get the cards you really needed was an interesting dilemma. Mark G made it two wins for the night by getting several reward tokens without the need to illegally dump. Although I did manage to get more rewards, the three cards I dumped tipped the balance in Markâ€™s favour.