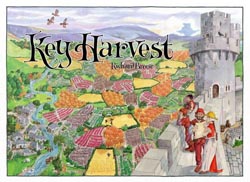 This week, there were four of us so I decided to try out Richard Breeseâ€™s latest game, Key Harvest. I was looking forward to this as the â€˜Keyâ€™ series of games has been filled with very good game ideas.

The idea behind the game is to score points by developing plots of land through planting and harvesting fields of particular crops and employing workers to help farm the land. A playerâ€™s turn involves taking two out of four possible actions: Firstly, you can initiate the sale of a plot of land, placing it in your store and setting a price in crops (weâ€™re a bartering economy here) for that plot; you can buy a plot of land that has been offered for sale by you or another player, by paying the required combination of crops, and then immediately cultivate it; thirdly, you can employ a worker in your fields and he will give you an immediate benefit (such as awarding you a free harvest or recultivating an already harvested field); and finally you can harvest a group of fields to obtain the crops sown. Whenever plots of land are put up for sale, the market either brings a new plot onto the market or an event occurs. The events interrupt play and give players additional opportunities for developing their position. Once ten events have been drawn, the game ends and scoring takes place with points awarded for each worker employed, each playerâ€™s largest and second largest groups of fields and having the greatest stock of each type of crop.

There are some very good ideas in the game and there is a lot of angst in deciding which actions to take â€“ you always want to do more than is available to you. However, our game suffered from the non-appearance of events: we went through six events pretty quickly and then they just dried up â€“ I think the next event turned up over an hour later and, by that time, we were all pretty sure I had the game sewn up that we decided to call time a short while after. We all noted that it was pretty difficult to get the townsfolk into play and I was the only one whose field network really helped bring them into play: I managed to get one of the level 5 and two of the level four guys working for me, whereas only Mark G managed to get a level four worker into play.

I think the others were a bit disappointed â€“ the first half of the game played really well but the tile draw meant that things stagnated badly. Iâ€™m not sure it was helped by the way we played as everyone was discouraged from putting things up for sale because, whatever the price set by the person initiating it, the other players were doing their utmost to stop that player from getting it. A bit of negative group-think. However, I would hope that with a better distribution of events and more competition for the townsfolk, another playing should restore my faith in the game â€“ certainly other reports have been pretty positive.