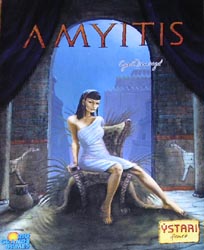 This week, there were just the three of us so, for our first taste of the Essen releases, I chose Amyitis, the new game by Cyril Demaegd published by Ystari and Rio Grande.

The game is based around the building of the Hanging Gardens of Babylon and each player represents a Babylonian seeking to raise his prestige by building gardens, the irrigation networks needed to support the gardens, by trading, and by recruiting peasants, priests, engineers and merchants to help them. Play takes place over several rounds and each round sees the player performing a number of actions to develop his position. The action takes place on two boards: The Babylon Board and the Mesopotamia Board. On the Babylon Board, recruit actions take place. The player can recruit a peasant to farm for resources, a priest to represent him in one of the three temples, an engineer to provide irrigation for an area of the gardens, or a merchant to gain camels. Camels are needed for the Mesopotamia Board, where you travel from city to city trading the resources you have collected for prestige points or Court cards (that improve certain abilities, such as being able to move further by camel, or income each round), or buying plants that immediately get placed in the gardens for additional prestige, coins, camels etc. The game ends when a certain number of the garden plots have been planted at which time bonuses are awarded for contributing a certain number of plants and whoever then has the most prestige wins.

Amyitis is another very nice game from Ystari. At the beginning, there are so many different choices you can make that it takes a while to get your head around what you are trying to do. However, there are many routes to try and progress can be made following very different strategies. The court cards you gain will determine how you try to progress but being frozen out of certain benefits does not doom you to failure. Mark K was unable to get a banker card which made money very tight for him but he was able to adapt and concentrating on the caravaneer enabled him to travel around the Mesopotamia board quite freely. Time-wise, this took us a bit longer than we thought but there is so much going on that the early rounds inevitably took a while. This shouldnâ€™t be a problem in subsequent games. Mark Kâ€™s rating did, however, reflect the time taken to play. The result of our game came right down to the wire with Mark K managing to stop me from planting on the final turn, which would have given me enough to keep the lead. Instead, his 10 point bonus for planting 6 times gave him the win by just 2 points.