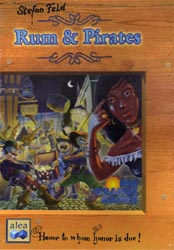 There were five of us this week and so we were, at last, able to try the 10th game in the Alea big box series: Rum & Pirates. This has come in for some criticism as it is a bit more family-oriented than others in the series but I think it stands up as a very good game for what itâ€™s seeking to be (albeit that it may be a bit long at 5 rounds for 5 players).

Anyway, the five rounds represent five days during which your band of pirate followers are scouring the various town locations for the best plunder before heading to the ship to try and secure a comfy bed for the night. On your turn, you choose between visiting a location, paying a coin to rest, and heading to the ship (which ends your involvement in the round until the beds are allocated). There are 10 different types of location to visit, each of which gives the visitor a different benefit. Most of them allow the active player to gain VP tiles but others allow you to recruit an extra pirate (useful for extending your turn) or claim some rum (which allow 2 re-rolls if you get an unsatisfactory dice result. When you go on the ship, any pirates you have left help you in the wrangling for a decent bed. However, rolling consistently low means you get eliminated pretty quickly, irrespective of how many pirates you take on board (Do I sound bitter? You betcha!) Whoever has the most VPs after five days wins.

Rum and Pirates is a lot of fun, providing you take it in the right spirit and donâ€™t mind the die rolls interfering with your best laid plans. I enjoyed it and found that there is a bit of thinking required to map out the best locations to visit, trying to slow your pace to delay going onto the ship and trying not to leave the next player with easy points to be had. I failed remarkably in this respect as Mark G managed to clock up some high-scoring visits that I hadnâ€™t spotted. For example, he managed to get to a four tile pub late in the game with no-one able to join him for some very easy free points. None of us were surprised that he emerged the winner, although his margin of victory wasnâ€™t as high as we thought it was going to be. Good fun and one Iâ€™d lie to try again with either 3 or 4 players.